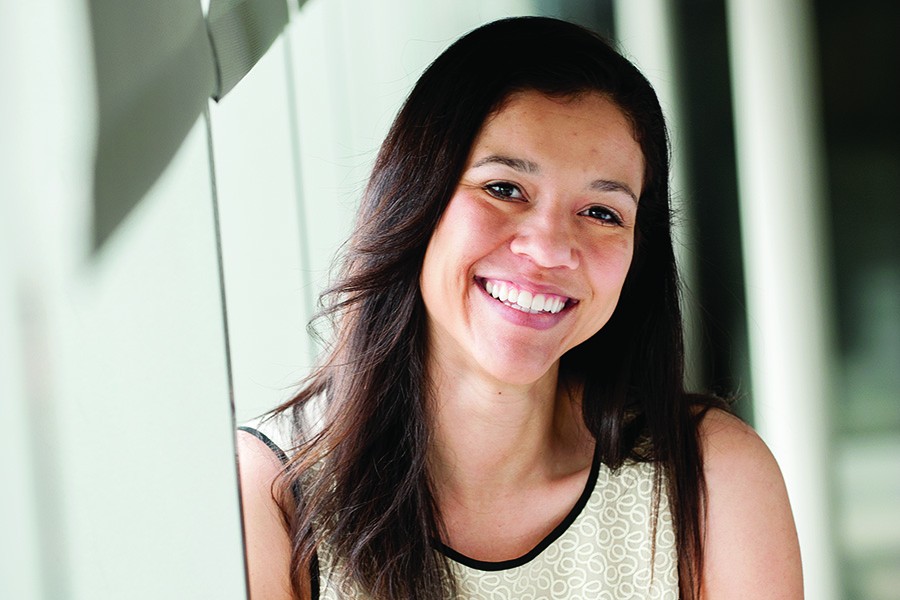 Amanda Latimore's early years were marked with uncertainty and upheaval. Her mother couldn't provide a home, a string of family and friends provided only temporary housing, and when she finally found a settled life with her stepmother's family in small-town South Carolina, her mixed-race heritage didn't make things any easier.

"I have a very colorful background, not only in the situations I've been through but my racial upbringing," says Latimore, SPH '12 (PhD), the only mixed-race child in her stepmother's all-black household. As a military family living near Shaw Air Force Base, "we didn't have a lot of money," she explains. "I got sent to college with $25 and a 'Good luck!' But I had enough support and personal drive to say, 'Yes, I can be something better.'"

But she needed help to do it. It was the C. Sylvia and Eddie C. Brown Community Health Scholarship that made it possible for her to earn a PhD from the Bloomberg School of Public Health and, like all Brown Scholars, conduct public health research to eliminate health disparities in poor, urban populations.

The seeds for the scholarship had been planted decades earlier, as Eddie and Sylvia Brown, the Baltimore philanthropists who made Latimore's doctoral education possible, worked to overcome their own sets of disadvantaged circumstances. Eddie Brown, born to a 13-year-old mother, was raised by his grandparents in Apopka, Florida. An anonymous donor who saw his potential paid for his college education, and he eventually became the founder and owner of Brown Capital Management. Sylvia Brown, who comes from rural Virginia "where health conditions weren't the best," has spent a career in health education and business and now sits on the advisory board of the Bloomberg School.

While the couple was traveling with the advisory board in 2005, Eddie Brown and then Dean Al Sommer talked about Johns Hopkins' ranking as the world's number one school of public health. "What I find so interesting and absolutely disturbing about that," Eddie Brown recalls saying, "is that your tagline is 'Saving Lives— Millions at a Time,' and you're operating in 140-something countries around the world, but yet in East Baltimore, there are some of the worst health conditions in the world. Why don't you do something right at your front door?"

By 2007, the Browns and the School of Public Health had established a fully funded fellowship program— including tuition, stipend, and research support—for public health doctoral students to improve health outcomes in Baltimore City's poor neighborhoods, and after five years, the program was opened to students who want to work in poor, urban communities across the U.S.

Latimore, one of the scholarship's inaugural recipients, is just one of 17 students who have received funding in the six years of the program. Today's Brown scholars' interests include researching how childhood adversity affects adult functioning, examining public policy and philanthropy's effect on health outcomes, and discovering better ways to put public health research discoveries into direct community action.

Latimore's early studies were in psychology, and her first jobs after receiving her bachelor's degree were working with homeless clients, sex workers, and drug users to reduce their risk of HIV. Although she enjoyed helping people one-on-one, she soon realized that there were ways to make a bigger impact.

"How do you get a job if you're homeless and don't have an address or ID? How do you stop using drugs if all your friends use drugs? I've been thinking about these kinds of racial issues, drug use, and environmental factors for a long time," says Latimore, who is now a postdoctoral researcher at the Bloomberg School of Public Health. "I have a lot of passion for what I do because I could just as easily have been one of those people I am now helping."

Latimore arrived as a Brown Scholar in 2007 and says coming to Hopkins was the easiest—and best— decision she ever made.

As a doctoral student, she continued her research on HIV- and STI- related risk factors, taking a social epidemiology approach that combines the population-level science of epidemiology with her individual-level training in psychology. After receiving her PhD from the Department of Epidemiology in 2012, Latimore was invited to stay for a postdoctoral fellowship and is now in her second year.

"This really is part of a new wave of doing research, really looking at the community and empowering community change for individuals rather than just placing blame on individual behaviors," she says.