I gathered my tableware one day 50 years ago and dutifully carried my tray toward a doorway in Levering Hall marked TRAYVEYOR. I was visiting campus to interview with the Admissions Office, and after finishing a tuna fish platter, I was in search of a place to discard my trash. The doorway opened to a small room with a gaping rectangular opening in the wall. It was obvious to me that the management of the dining operation wanted all diners to put their trays, etc., into this void— the Trayveyor. I peeked inside. There was no bottom. Two long "bicycle chains" on the left side of the void and two on the right moved steadily downward through the empty shaft to what appeared to be a kitchen area on the lower floor. 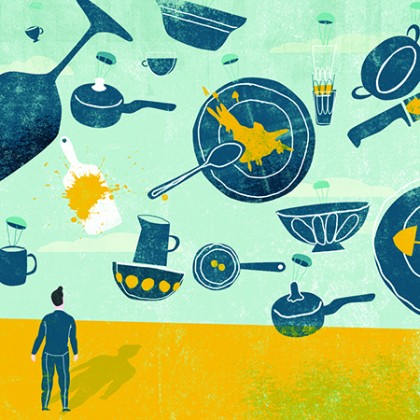 I was concerned that if I simply put my tray into the void and let go, the objects would fall and break. I reflected, These scientists and engineers at Johns Hopkins are really smart. At the Applied Physics Laboratory, they had made great contributions to our nuclear submarine fleet. During World War II, they had invented the proximity fuze, which helped shorten the war. Perhaps these brilliant Hopkins scientists and engineers had invented some type of levitation.

Sadly, there was no one around to ask. There was no one to demonstrate the proper use of the Trayveyor. It really looked to me that, barring levitation or some zero-gravity effect, my tray and lunch vessels would drop like rocks. I reminded myself, These scientists and engineers at Hopkins create the most sophisticated spy satellites in the world. They are brilliant people. I steeled myself and thrust my tray into the middle of the void. I repeated to myself, Johns Hopkins engineers and scientists are brilliant people. I took a deep breath. I opened my hand. Everything fell.

CRASH. BANG. SMASH. SPLATTER. My stuff plummeted to the floor below. My future as a Hopkins graduate was in ruins with the fragments and shards of my lunch vessels. Filled with terror, I fled Levering Hall. Would they find me? Had there been a witness? Would the Campus Police arrest me? How would I get back to New Jersey?

Behind Levering Hall, I hailed a cab to take me to Penn Station. I had escaped. Whew! Months later, I received my "thick" envelope inviting me to join the Class of 1968. Early in my freshman year, I slipped back into Levering Hall to re-examine the Trayveyor. This time, I noticed there were sets of four L-shaped brackets, one bracket attached to each of the four synchronized roller chains. The intended procedure was to slide one's tray onto a set of four brackets for it to be safely lowered to the next level.

I reflected, These scientists and engineers at Johns Hopkins are really smart. I feel bad that I caused damage to Johns Hopkins property 50 years ago. Please find enclosed my check for $10, and forgive my moral lapse.

Bert Mordechai Miller graduated from Johns Hopkins with a degree in political economy. He holds a PhD in mathematics education and spent more than 40 years teaching math in Baltimore-area secondary schools and colleges.