Nonprofit 'Next One Up' links lacrosse to college readiness 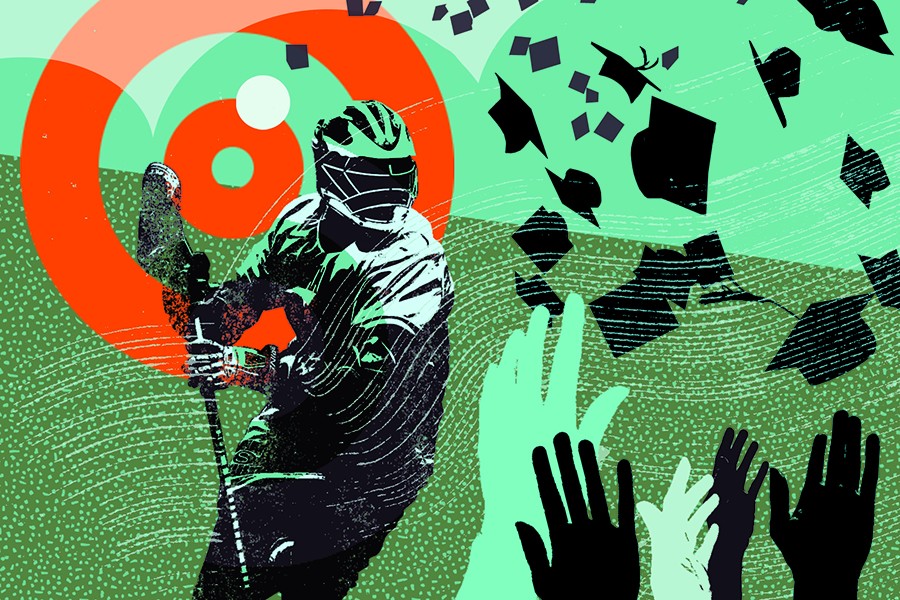 Twenty-five years after Matt Hanna, A&S '02, and Richard White first met in sixth-grade remedial math class in Geneva, New York, the two sat down in a prison cafeteria. White had committed a series of robberies after high school and had been in jail for roughly 15 years. In that time, Hanna had graduated from Johns Hopkins University, played lacrosse professionally, and spent 10 years working as a high school history teacher.

"I said, 'Look, Rich. I started this program, and it's based on you,'" Hanna recalls. "And that was hard for him to swallow."

The program is Next One Up, a nonprofit organization Hanna founded in 2009 to support Baltimore student athletes with mentorship, athletic training, and tutoring. He started the nonprofit after unofficially acting as a mentor to several of his students while teaching in Baltimore City schools. Those students, he says, reminded him of his childhood friend.

Hanna hadn't been teaching in Baltimore City schools for long when he learned that he needed to re-evaluate how he dealt with his students. "I gained some rapport with the kids, and I started to understand their backgrounds," he says. "I understood, that kid didn't eat this morning. He's angry because there's no food at home. It went from 'Deal with it' to 'Run down the hall to the teachers lounge, grab a doughnut, then come back and participate.'"

In 2008, Hanna started a club lacrosse team at the school and got a fellow Blue Jay named Chip Carlson, A&S '82, to donate money for several of his players to attend lacrosse summer camp. Before long, Hanna was proofreading essays, doling out college application tips, finding tutors, and even covering tuition for some of his student athletes. "I thought, 'I'm really enjoying this, but it's taking a huge chunk out of my life,'" he says.

Baltimore City students battle bleak statistics when it comes to higher education. The percentage of graduates enrolling in college the fall after getting their diplomas is 44 percent— a five-year low, according to a July 2013 article in The Baltimore Sun. More and more Baltimore students are opting for two-year colleges, where only 10 percent of students obtain a degree within six years, the article says.

"Here's what I am, and here's what I am not," Hanna tells his student athletes when he meets with each of them for the first time. "I am not a sports agent. I am not a parent. All I'm going to do is walk with you through the process of finding high schools, finding colleges, and making sure sports is a major component."

But, in reality, it's not that simple. Hanna has myriad roles, from coaching scrimmage lacrosse games to fielding texts from high school athletes who need new sneakers. He gets to know the athletes' families and the complicated situations they often face.

"He never gives up on us," says Winfield Hopkins, a senior at Baltimore's Cristo Rey Jesuit High School who applied Early Action to Goucher College, where he hopes to play lacrosse and study psychology. "Once you join an organization like Next One Up, it's a big thing. People want to know what Next One Up is about. It gives me a chance to represent not only myself in a positive way, but Next One Up."

In September 2013, Hanna was awarded a fellowship from the Open Society Institute (as part of the Campaign for Black Male Achievement), which provides $60,000 in seed funding over 18 months and access to a network of former fellows. The fellowship has allowed him to step away from teaching in order to focus on Next One Up. "The momentum has been huge," Hanna says, though noting he's still a one-man show. Until a recent move into donated office space in Mount Vernon, he had been working from his kitchen table while trying to balance his life as a husband, father of two, and executive director.

"As I've gotten rolling and the momentum has been created, I realize I made a good decision. This will not be an easy road, and I start to realize what it actually takes to build an idea and build a charity. The next thing is how to fund that charity."