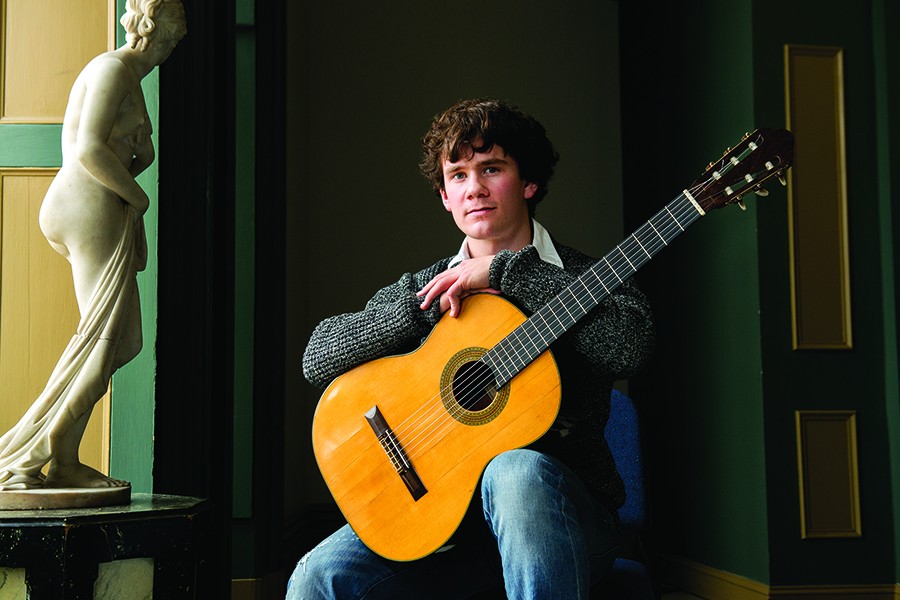 Cradling a purple-hued hardback in a basement room of the Milton S. Eisenhower Library, Gabrielle Dean has yet to imagine the many ways the unique tome that has just arrived at Johns Hopkins University will be used.

"This is John Barth's copy of James Joyce's Ulysses, from when he was a student here," the Sheridan Libraries literary rare books and manuscripts curator says, thumbing through the pages. The book is filled with underlines, as well as notes in the margins. Individual chapters of the 1934 edition have been meticulously tagged with handwritten labels that list episode titles, like "Sirens" and "Cyclops." An acclaimed writer who taught creative writing at Johns Hopkins, Barth, A&S '51, '52 (MA), worked with the libraries to bring his archives to the university. Nearly 50 cardboard boxes stocked with books have just arrived here; they'll be unpacked and cataloged before parts of the collection are exhibited in 2015.

"Barth made these little tabs," says Dean, pointing at his organized dissection of the Irish masterpiece. "He was studying the book. This is a person who was going to be a writer."

Such annotated books, along with manuscripts of his own novels, provide clues about Barth's own writing process—precious information for anyone wishing to study the author or the art of writing.

It's just one example of the importance of such gifts to the Johns Hopkins academic experience. From a first edition of Newton's Principia and the papers of Inner Harbor developer Martin Millspaugh to prized guitars and towering sculptures, these donations play a vital role in connecting students to a world beyond computers and classrooms.

"In this day and age, we're getting away from the three-dimensional, the tangible object," says Jackie O'Regan, Johns Hopkins curator of cultural properties. "Kids are learning online, but nothing beats seeing something in person."

Indeed, with each object donated to Johns Hopkins, there's a story that comes with it. Last year, the Peabody Institute was gifted a 1958 Ignacio Fleta guitar by David Paulsen and his wife, Claude Duvernoy Paulsen. David Paulsen, who has spent most of his life producing, writing, and directing television and films, studied violin in the 1950s at the Peabody Preparatory, where his mother, Mildred Pelovitz, taught piano. He also played the guitar, studying under the tutelage of Venezuelan guitarist Rodrigo Riera.

Deft in many careers, Paulsen left for Europe in 1966 to tour as a skating clown with Holiday on Ice. While there, Riera recommended Paulsen visit Ignacio Fleta, a famed luthier in Barcelona, to see if Paulsen could obtain one of his guitars.

"I recall Fleta being a very lovely man who served me a little aperitif in the afternoon," says Paulsen from his home in Los Angeles.

Although neither spoke a common language, Fleta was able to communicate the bad news: The wait time for one of his instruments was five years. Would Paulsen, however, be interested in a guitar Fleta had originally made for one of his sons?

"It had some cracks in it, but it was still a magnificent instrument," says Paulsen. "The sound is a wonderful, rich, full sound. It plays like a dream; I don't know if I could describe it better than that."

Paulsen paid $150 for the guitar, and Fleta repaired the cracks. It became Paulsen's most prized guitar.

In recent years, however, Paulsen had been playing less. His hands no longer worked the Fleta's fingerboard as they had in the past. Moved by the classical guitar music of Peabody faculty member Manuel Barrueco, Peab '75, the Paulsens decided to part with the Fleta.

"I listened to that and said, 'You know what? They should have it,'" recalls Paulsen. "It would be thoroughly enjoyed."

When the Fleta—now appraised at $38,000—finally moved to Peabody last April, it traveled with Peabody's director of major gifts on Southwest Airlines in its very own seat. Today, along with a 390-year-old Maggini violin donated by the late Karl Kostoff, Paulsen's Fleta is one of the jewels of Peabody's collection.

"I think it will serve exactly Mr. Paulsen's purpose, which is to give the students or teachers the opportunity to experience playing a first-class instrument," says Barrueco. "It's a nice feeling of support for the work we're doing."

Of the more than 1,000 instruments owned by Peabody, the majority has been gifted to the institution, according to Patrick O'Neall, the institute's director of major gifts. Pianos are such a popular donated item that Peabody is able to loan uprights to their piano students for use in their off-campus residences.

Every object offered for donation is carefully evaluated to see whether it fits with the university's mission before it is accepted. If an object is deemed a suitable gift, the Office of Gift Planning ensures there are no issues surrounding the object's procurement or ownership prior to its donation. Some donors also provide funding for related expenses, like maintenance.

"Gifts in kind," as such objects are called, "play an indispensable role, especially for the libraries and museums, which support learning through objects," says Winston Tabb, Sheridan Dean of University Libraries and Museums. "Gifts in kind are often literally 'the gifts money cannot buy.'"