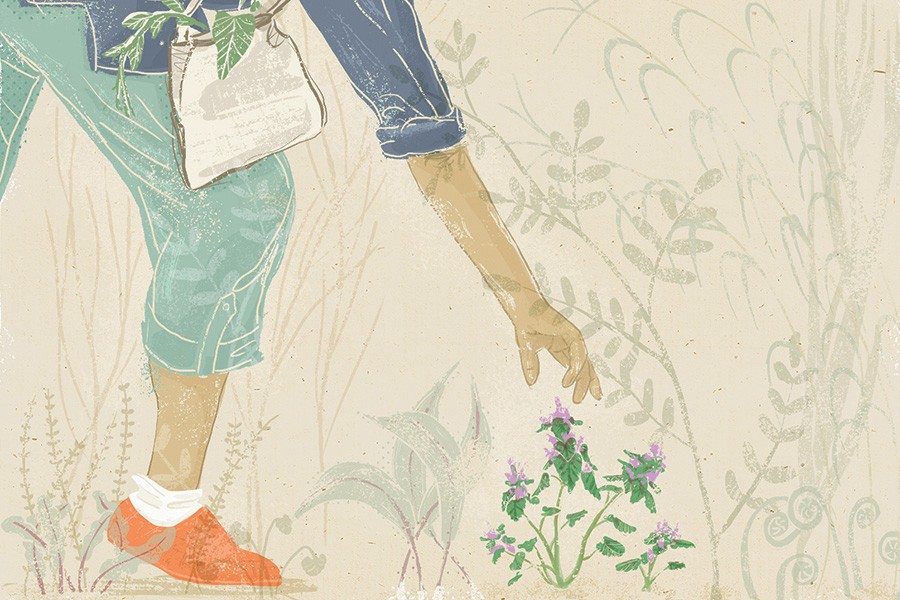 Ava Chin, A&S '00 (MA), grew up in a New York City apartment, where she sometimes pulled wild garlic from its courtyard. She is the former "Urban Forager" columnist for The New York Times and currently an associate professor of writing at the College of Staten Island. Her new book, Eating Wildly: Foraging for Life, Love, and the Perfect Meal (Simon & Schuster) launched in May.

In 2008, heartbreak and frustration drove her to seek sustenance in plants similar to those her Chinese grandfather had tossed into stir-fries. She had been through a breakup and realized that she needed to end her pattern of dating a certain sort of man. To distract herself and set a new course, she began learning about plants and foraging. A few years later, Chin took a date on a forage and decided he was a keeper because he had the patience to go; they are now married, have a daughter, and gather greens while visiting his parents in the United Kingdom.

To learn foraging, Chin went on walks with New York–area naturalists, and picked plants in Boulder, Colorado, and upstate New York. She joined the New York Mycological Society, which helped her identify mushrooms and learn which to leave in the ground.

Chin then began pitching articles related to foraging to New York Times section editors. In 2009, an editor asked for an essay about finding edible plants in densely developed Brooklyn neighborhoods such as Fort Greene and Clinton. Chin was concerned. "Those areas aren't known for their green spaces," she says. "But I found edible plants in tiny triangular parks, in medians, in other places."

Finding plants near streets and in highly trafficked areas is "guerilla foraging," she says. "It sharpens skills, helps you to know what is growing. If something is growing in the middle of Flatbush Avenue, then it's probably also in Prospect Park or in another place that's less exposed to carbon monoxide." In spring, Chin might find garlic mustard, ramps, and purple dead nettle (a relative of mint).

And while edible plants are all around in the livelier seasons, she also loves foraging in winter. "A few plants still grow: wild garlic pops through the snow, chickweed, winter oyster mushrooms, enoki mushrooms." She adds that the fallow months are also a good time to look at the remnants of old plants—so you know where they will grow in the lushness of spring and summer.

Finding wild foods has expanded Chin's view of place and seasonal change, she says. "In a city like New York, we don't tend to talk about the land—we think that's out West or something—but I do. I think about what's happening if we're having a long winter, a short spring, or a hot early spring. A really protracted winter, for instance, might mean the ramp season is pretty good."

In rushed modern times, keeping an eye out for eats by the sidewalk slows us down, says Chin. "I'm as busy as anybody else, but foraging helps give me a pretty good awareness of what is around me. It sharpens my awareness."

The popularity of food­related activities—whether growing or foraging for food—have been on the rise within the last five years, Chin says. "People want to know where food comes from and are suspicious of industrialized agriculture. More chefs are also working with wild foragers."

Learning about foraging can be slow. "There's no quick and easy way to do it, but that's part of the pleasure of it. I'm still learning about edible plants wherever I am— I remember being just really thrilled that I could find different kinds of plants and munch on them."

On a recent summer vacation on the southeast coast of England, Chin and her husband and daughter gathered blackberries, vitamin­rich stinging nettles, and a spinach­like green called orach. Of the English coast, she says, "They say you can see France from here, but I can't." She's too busy staring at the ground.