My last patient of the day brought his 5-year-old daughter with him to his appointment, a tiny button of a girl with a pink top and matching bottoms. They sat next to each other in the waiting room and played got-your-nose. I let her play with my stethoscope during his appointment. 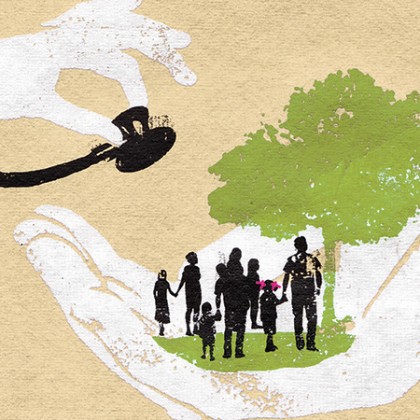 "Is there anything else I haven't asked you about that you think I should know?" I inquired as I was wrapping up.

"Actually, there is this one thing," he said. "Probably nothing, but..." and then he delivered a textbook description of the early symptoms of a disease I knew to be often terminal, especially in low-resource settings like this one.

One day, I felt sure, I would hear stuff like this and feel resolve, or determination, or maybe nothing at all, but not yet. I was a new nurse; I wasn't used to this—the raw vulnerability of other people's lives. I work at a community nursing center for the uninsured in East Baltimore, and I was the only one there that day. My eyes kept coming back to his daughter's pink hair ties, and suddenly the fragility of the moment made it feel like just looking at them could make them shatter. "Well," I said, studying the space between us. "I'll call up the nurse practitioner and tell her what you've told me, and then I'll contact you later today and let you know what her advice is." I was almost certain I would be sending him to a more advanced facility. There was nothing more I could do there, not with just me, a blood pressure cuff, and a handful of supplies. As a registered nurse, it's not actually my diagnosis to make; not my bad news to break. They stood up, gathered their things, and got ready to go home. He prompted his daughter with a look: "What do you say?" he said. She gave a dimpled smile, and then she stretched her arm up to shake my hand.

"Thank you for taking care of my dad," she said, giving my hand a businesslike wag.

After he was sent to an urgent care center and eventually hospitalized, I called his wife periodically to see if they had any questions or needed support. Slowly, swept up in the day-to-day of the clinic, I stopped thinking about them all the time.

Almost two years later, his daughter bounds around the corner of my office door, taller now but with the pink hair ties still in place. Her father is thinner, but he is still here. When I get home, I let myself cry with relief and happiness, and I think: I hope I never get completely used to this job.

Margaret Adams is a writer and registered nurse. Her work has most recently appeared in The Portland Review and The Delmarva Review.