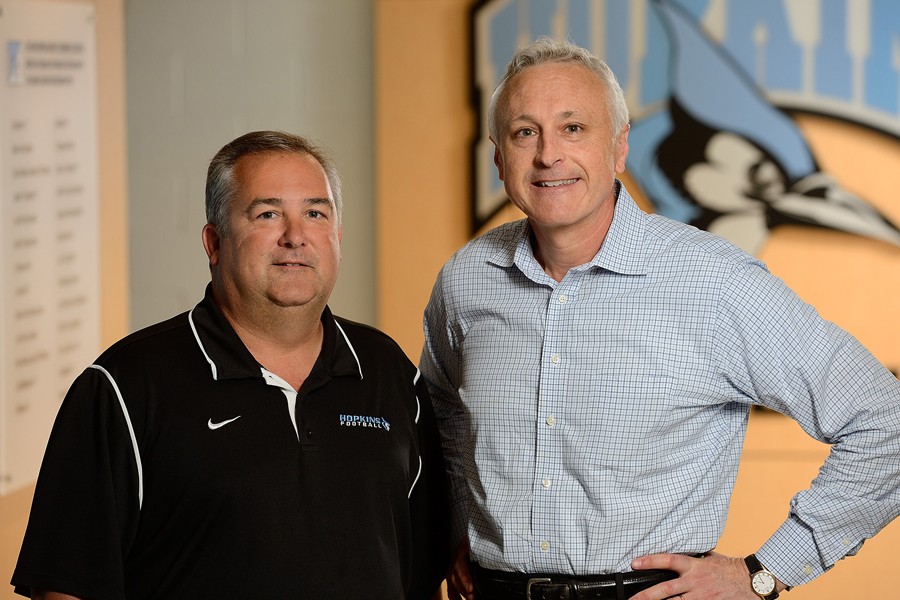 When Jim Margraff, A&S '82, and Bill Stromberg, Engr '82, first stepped onto the football practice field at Johns Hopkins in August 1978, they were a couple of nervous freshmen. But within a few days Margraff, a homesick quarterback from Long Island, and Stromberg, a Baltimore native and sure-handed receiver, were working alongside the rest of the starters.

"Jim was a natural at being in charge. He was the one everybody turned and listened to," Stromberg recalls. "We clicked right away."

"I was probably overly intense. I respected how even-keeled Bill could stay," Margraff says. "From day one, Bill and I got along and he was the best receiver we had."

"I threw to Bill for a really long time one day," Margraff remembers. "The next day, he comes up to me and says, 'let's have a throw.' I told him that we did a ton of it yesterday and that he looked great. Bill said, 'I'm not the one who needs the work.' He was honest, and he was right."

The pair rewrote the school record book, starting all 36 games in their four years together. They became the greatest passing combination in Johns Hopkins history.

This fall, Margraff enters his 25th season as head coach at Homewood with 167 victories, by far the most in program history. Stromberg, a Johns Hopkins University trustee and the only Blue Jay to be elected to the College Football Hall of Fame, is in his 27th year at T. Rowe Price, where he is head of global equities.

Although the two maintain hectic schedules that prevent them from having much time to get together in person, they are never out of touch for long.

"We don't see each other every week or month, but it's easy to talk to Jim about anything," says Stromberg, who typically comes to two or three home games a year and sits with Margraff's wife, Alice. "It might be a two-minute chat on a Monday just to talk about the game, things I saw. We've always been comfortable that way with each other."

In 2005, when Margraff had open-heart surgery to correct a congenital defect in his aorta, Stromberg was among the first friends offering support at his bedside. Last winter, it was Margraff rushing to see Stromberg in the hospital after a bad fall on the ice left Stromberg with a broken foot.

"You're vulnerable, and you need a good friend to talk to at a time like that," Stromberg said. "Jim has always been that to me."