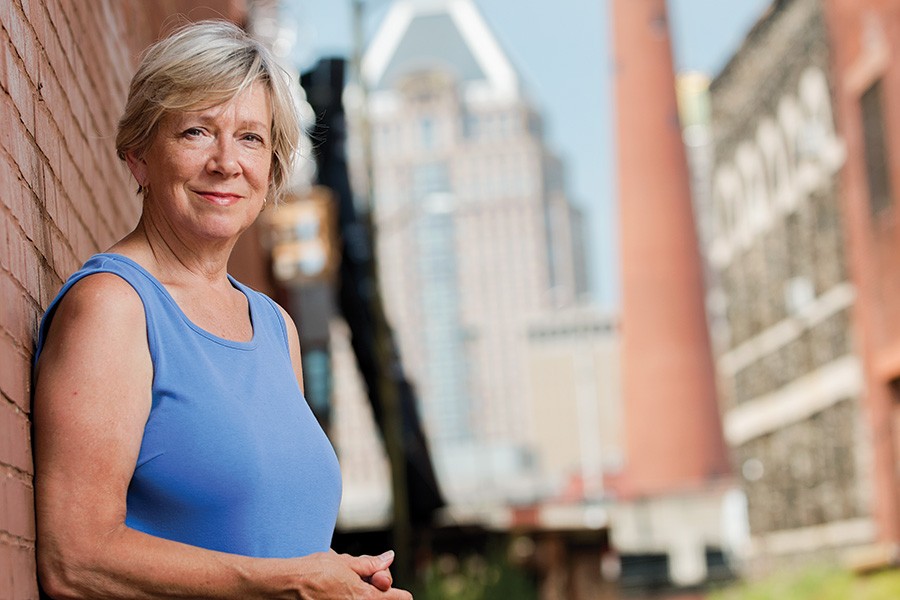 When Carey Business School Associate Professor Lindsay Thompson, A&S '01 (PhD), was taking her first vows as a nun four decades ago, she didn't picture herself trying to change the way business schools teach. Nor did it cross her mind over the next 30 years, as she left the order before taking final vows, worked in state government, and raised her children. Her Johns Hopkins dissertation concerned fourth-century paganism and Christianity, not 21st-century capitalism. She taught Latin and Greek, not wheeling and dealing. "As a classicist, all my work was studying culture where everybody was dead," Thompson says.

But in 2002, the School of Professional Studies in Business and Education asked her to teach an ethics course for business students. Those students didn't want to spend hours knee-deep in philosophy texts. "Not that they weren't philosophical," she says. "To them, ethics is a tool for making better decisions and doing better business." She found their practicality and urgency refreshing and subsequently took on a course for MBA students in the application of business tools to social problems around the world. Here was ethics writ large—business students in the street, finding a way to reconcile profit with probity. "Business can be virtuous," she says. "If it is virtuous and excellent on a wide scale, it literally can change the world." She pondered a domestic version of the course that would get students out of the classroom and into a Baltimore community. "Most medical schools are connected with hospitals where you're immersed in a professional world of practice," Thompson says. "You don't want to have a physician coming out of medical school who's never seen a patient." Business students, she believed, should work in communities of practice, too.

In 2012, CityLab was born. Thompson's two-course "social enterprise laboratory" partners students with existing economic and community development projects. In Thompson's analogy, the business and community leaders are the veteran physicians and specialists; the students are the interns and residents. "Using many streams of practice and high-level thought," she says, "what is the best way we can make neighborhoods and cities livable and work for people?"

Thompson knew right away what the first site should be: Baltimore's Jonestown neighborhood. Built in 1732, the neighborhood lies between the downtown business district and the new, upscale mixed-use area Harbor East and is full of the kinds of historic brick structures that have become restaurants, offices, and apartments elsewhere in the city. That much potential for development makes Jonestown an exciting place for her students to get into the nitty-gritty: developing business models, partnerships, and financing structures that they can propose to local entrepreneurs and developers. "It's really easy to come up with an idea," Thompson says. "But how do you turn that idea into an investment-worthy deal?" CityLab strives to give business students firsthand experience in how that happens.

For example, CityLab students hooked up with a developer who's turning a 133-year-old brick building into apartments and retail space. With the structure's former use as a creamery in mind, students created a business plan for a café in the building. The CityLab proposal calls for hiring Jonestown residents and using some of the café's profits to help seed startups by local youth, some of which could come out of a small incubator space the developer is considering for the building. The developer is interested in the CityLab proposal, and suggested adding one more feature: ice cream from Taharka Brothers, a local, African American–managed business that itself emerged from a program to teach business skills to at-risk youth.

The church and the academy have equally informed Thompson's vision of economic development. She learned theology from the Jesuits and observed the social justice work of the Sisters of Mercy and the School Sisters of Notre Dame. The philosophers and scholars she cites as influences—Immanuel Kant, Aristotle, Amartya Sen, Martha Nussbaum— share a concern for human potential. "There is a moral purpose to wealth," says Thompson. She believes that urban economic development should be environmentally sustainable. It should build social capital and empower the civic voices of its most vulnerable residents. It should create sustainable wealth for the whole community. In short, Thompson says, it should "foster human flourishing. Economic development and human development go hand in hand."