Researchers with the Berman Institute face the toughest ethical choices 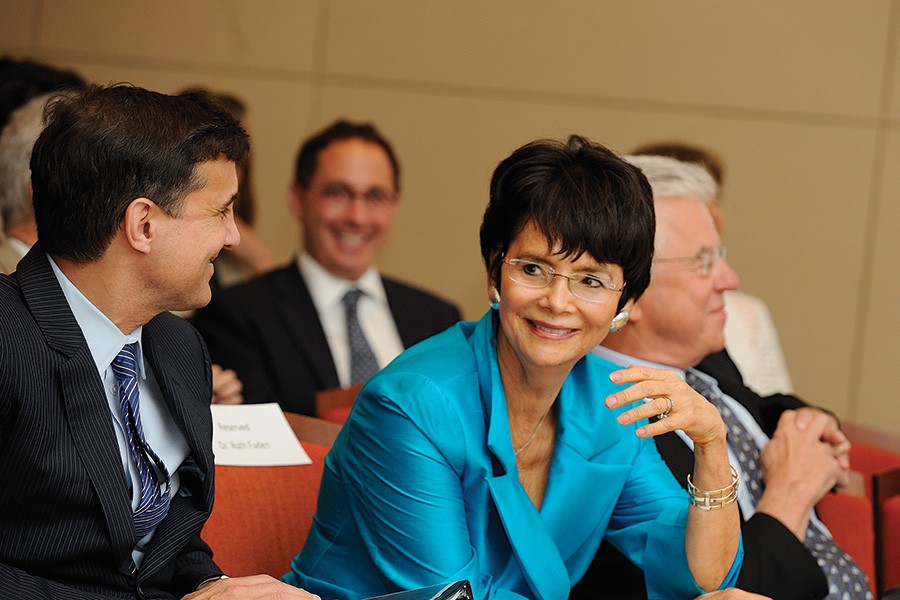 Beginning in 2013, Johns Hopkins researchers traveled around Maryland asking members of 15 different communities a gut-wrenching question: During a flu pandemic in which there are not enough lifesaving ventilators for everyone, who should be saved? Should those deemed most likely to survive receive the ventilators? Should it be left up to a lottery? Or should health care workers, who could aid others, get them?

As the research team observed each community's deliberations, one theme kept popping up, says principal investigator Elizabeth Daugherty Biddison. "We found a lot of interest in wanting to avoid making those decisions, which is very human."

The researchers were working on a project for the Berman Institute of Bioethics, an independent, interdisciplinary Johns Hopkins center dedicated to identifying and addressing ethical issues in health care, biomedical science, and public health. The project exemplifies the kind of issues that are the bread and butter of the Berman Institute: moral challenges that have no easy resolutions.

The institute recently achieved a milestone in its 19-year history: the endowment of its directorship, made possible by a multimillion-dollar gift from philanthropist Andreas Dracopoulos. Dracopoulos is a trustee of Johns Hopkins University, a member of the Berman Institute National Advisory Board, and a longtime supporter of the institute both as an individual and through the Stavros Niarchos Foundation, of which he is president. He first got involved with the institute nearly 15 years ago, and the Andreas C. Dracopoulos Directorship—the first known endowment of its kind for a bioethics center—is his vote of confidence in the institute's work so far and yet to come. "I don't see it as giving money to someone. I see it as they have earned it," he says. "And one has to help in every way one can help them go to the next level."

"No matter what we work on, we are committed not only to doing first-rate scholarship and first-rate generation of new knowledge, but we're committed to doing first-rate research that will help make the world an ethical place," says Ruth Faden, founding director of the Berman Institute and the inaugural Andreas C. Dracopoulos Director. "With Andreas' extraordinary gift, we can say, 'What do we do next?' ... We will only get better and better at what we do."

Faden plans to continue the institute's interdisciplinary approach to tackling bioethical issues. "Whether the methodology is empirical or philosophical or comes from the social sciences, we try to put the right kinds of expertise together for the right kind of challenges," she says. Take the Global Food Ethics Project, for example, an ambitious undertaking that has at its foundation the fundamental assumption that it is unethical for people to suffer for lack of nutritious food. The moral imperative to address world hunger will only become more pressing as the global population continues to expand, and some of the challenges we will face as that happens are ethical in nature—for instance, whether it is acceptable to employ genetically modified organisms to increase food production and thereby feed more people. No global ethical framework exists to guide decisions about food production, distribution, and consumption. As a first step toward creating those ethical guidelines, this fall the Berman Institute— along with the Bloomberg School of Public Health and SAIS—will host a five-day conference in Italy. The conference will bring together a diverse group of 25 international experts from such fields as climate change, plant genetics, and animal welfare to identify ethical issues that affect the feeding of the world's population.

The impact of the Berman Institute's projects range from short term to long term, and all contribute insight and perspective to decision making on topics of enormous importance. In the case of the public health emergency study, the research findings will be submitted to the Maryland Department of Health and Mental Hygiene to inform a statewide framework for health care resource allocation—one that includes community values and perspectives, which have been absent from many disaster preparedness plans.

With the stability that the Dracopoulos Directorship provides, the institute is poised to continue this work for a long time. "The idea was not to just build an institute that would be really flourishing for five or six or 10 years and then lose its center or its place at the university," Faden says. "Rather, we took the position that bioethics is not a problem that has to be solved. It is a label for territory that is never going to go away. There will be new or different issues— but there will never be a time when we are not dealing with bioethics issues as a society."