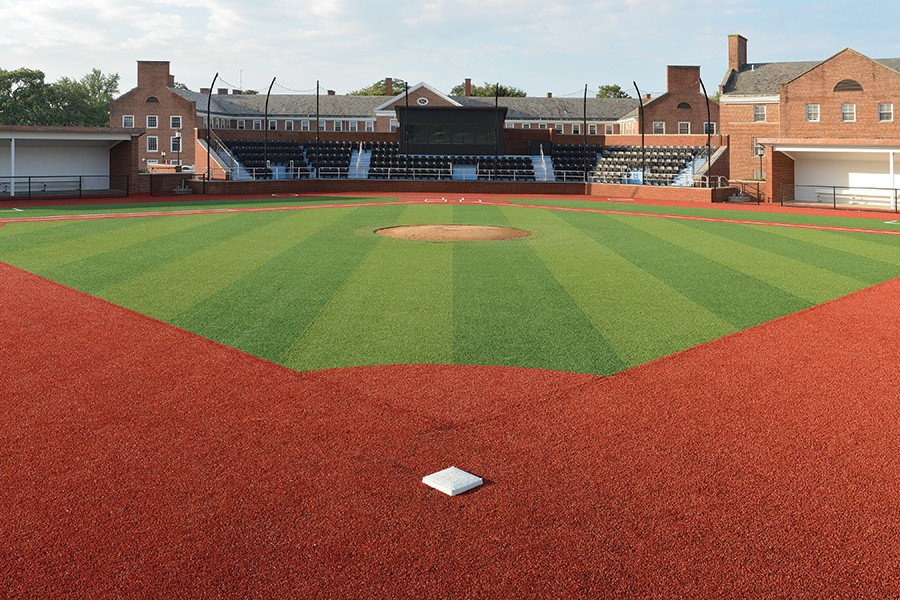 Image caption: The grand opening of Babb Field at Stromberg Stadium will be held on September 20.

This fall, Johns Hopkins starts a new chapter in its storied athletic history with the opening of significantly upgraded facilities for varsity baseball and tennis. The university also will debut a resurfaced Homewood Field and a new Blue Jay logo that will unify the look of Johns Hopkins athletics and tie in with the university's branding initiative.

The upgrades come at a high point for Blue Jays athletics—a record-breaking 2013–14 season during which the program placed third in the Learfield Sports Directors' Cup, the annual awards given to the nation's top overall athletic programs in each division.

Tom Calder, the university's director of Athletics, says the renovated facilities, which are wrapped by University Parkway and North Charles Street, will revitalize the northern doorstep of the Homewood campus.

"Years ago, one alum came up to me and said it would be great to have that corner become a welcome mat for the university and to really brand it Johns Hopkins. I agreed," Calder says. "That was the theme we carried all through these projects."

The $5 million baseball facility, named for longtime baseball head coach Bob Babb and lead donor and university trustee Bill Stromberg, features an all-weather turf playing surface, home and visitor dugouts, and a 260-seat, ADA-accessible grandstand with a modern press box. Other features include new home and away bullpens, batting cages, and backstop and outfield fencing. The stadium replaces a field that had been in use since the 1930s. "We were doing our best to improve the field, but it was obvious that it needed to be completely overhauled," says Bill Harrington, director of recreation and facilities for the Athletics Department.

Next to the baseball stadium will sit the new facility for men's and women's tennis. The existing six playing courts, which were cracked and overdue for repairs, will be completely resurfaced, and a new lighting system installed, by October. The hard court will have the same DecoTurf surface used at the Billie Jean King National Tennis Center, home of the U.S. Tennis Association's U.S. Open. The facility will also include spectator seating.

Homewood Field's new playing surface, consisting of 40 rolls and 40,000 pounds of fiber turf, was installed early in the summer. The field, which was last replaced in 2005, was stripped down to make way for a new surface, which mirrors the look and feel of natural grass and is the same synthetic turf system used by the Baltimore Ravens. It features a new black border with "Johns Hopkins" painted in blue at one end zone and "Blue Jays" at the opposite end. Harrington says that the university went for a bold, clean look in keeping with its new identity initiative. The black used in the nonplaying areas allows Athletics to use various logos and text on it throughout the year, such as the Big Ten logo come lacrosse season. First to use the new surface will be football, which opens its season at home on September 6.