The advice is simple. To eliminate bedbugs, spread gunpowder on and around your bed, light it with a match, and keep the room closed for an hour or more. To compliment a lady, tell her that her legs are "as stately and firm as a marble pillar" and her breasts are "as soft and tender as a pelican's." To soothe a teething baby, massage his or her gums with rabbit brains. Education historian Elizabeth Archibald, who teaches humanities courses at Peabody Conservatory, compiles pieces of advice like these on her blog, Ask the Past. Applying tips from very old books to contemporary questions, the blog takes on such topics as how to mouse-proof your cheese, groom your eyebrows, and determine if someone is dead. (Hint: It does not involve taking a pulse; it does involve an onion.) 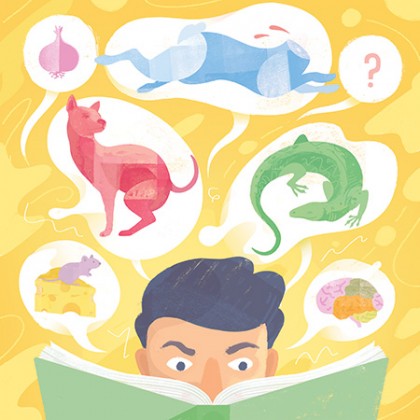 Ask the Past grew out of a class Archibald taught last year titled How-to: A History of Instruction. The course looked at classical, medieval, and Renaissance texts as how-to manuals—for example, Plato's Republic as a manual on creating an ideal and just society—and asked students to analyze handbooks and other instructional materials in the rare books collection of the George Peabody Library for their final research papers. Upon discovering a 16th-century volume on swimming, De Arte Natandi, that included instructions on how to clip toenails underwater, Archibald decided the antique texts deserved a broader audience.

"I thought these things were really fun and started collecting them for the amusement of my friends and colleagues," Archibald says. "It took off and started getting questions and comments from readers around the world." The blog currently receives about 2,000 visitors per day, she says.

The oldest piece of Ask the Past advice comes from around 300 BCE and explains how to predict rain. (Expect precipitation when you see centipedes in your house, tame ducks flapping their wings nearby, and frogs croaking more than usual.) Most counsel featured on the blog, though, comes from the 16th and 17th centuries, after the printing press had been invented. Archibald refers to this period as the golden age of the how-to. To a modern audience, many Ask the Past entries seem absurd. A text written in Italy during the 12th century advises anyone desiring long, black hair to anoint his or her head with oil produced from cooking a beheaded green lizard. A 1649 book by Thomas Hill informs people they can walk on water if they affix tambourinelike objects to the soles of their feet. Especially after finding a snarky, doubting annotation in a 17th-century hand in the margins of that walk-on-water entry, Archibald suspects some how-to manuals of yesteryear were intended more for entertainment than edification. "We view the instruction manual more narrowly now—they generally teach how to accomplish a specific thing and not much else," she says. "Manuals of the past were more interested in the various possibilities of the form, including entertainment and serious literature."

Some of the practical advice, though, holds up. Rules from Leipzig University in 1495 forbade anyone from treating a freshman badly by insulting or tormenting him, drenching him with water or urine, defiling him with dust or filth, or crying at him "with a terrifying voice." And in 1280, Amanieu de Sescás offered fashion tips still favored by style guides today. If you can't afford a fancy tunic, de Sescás wrote, you should "let your shoes and footwear, belt, purse, and knife be the finest you can have," for "one who knows how to wear well what is not lovely appears pleasing and courtly." "It tickles me when I find things like that, that never change," Archibald says.

While Archibald has not put bacon in her wine (to keep it from souring) or slept with raw beef against her forehead (to cure laryngitis), she has tried a 15th-century apple fritter recipe. Despite the vagueness of instructions that directed her to "use as much flour as needed" and "cook until it's done," the fritters were delicious, she says.

In addition to its entertainment value, Archibald sees the project as a natural complement to her academic research into the history of education, in that it indicates the types of things people thought could be taught by books. Renaissance authors, for example, equipped their readers with information that had been out of their reach during the hierarchy-heavy medieval period, Archibald says. "When the genre takes off during the Renaissance, you have a lot of manuals that explain not only how to do something but how to become someone," she says. Ranging in renown from Machiavelli's The Prince, to manuals of medicine for housewives, and instructions on how to dance or become a courtier for the common man, the newly popular genre provided people access to worlds previously unavailable to them. During this period, Archibald says, "there are a lot of things going on that speak to the power of the printed word."