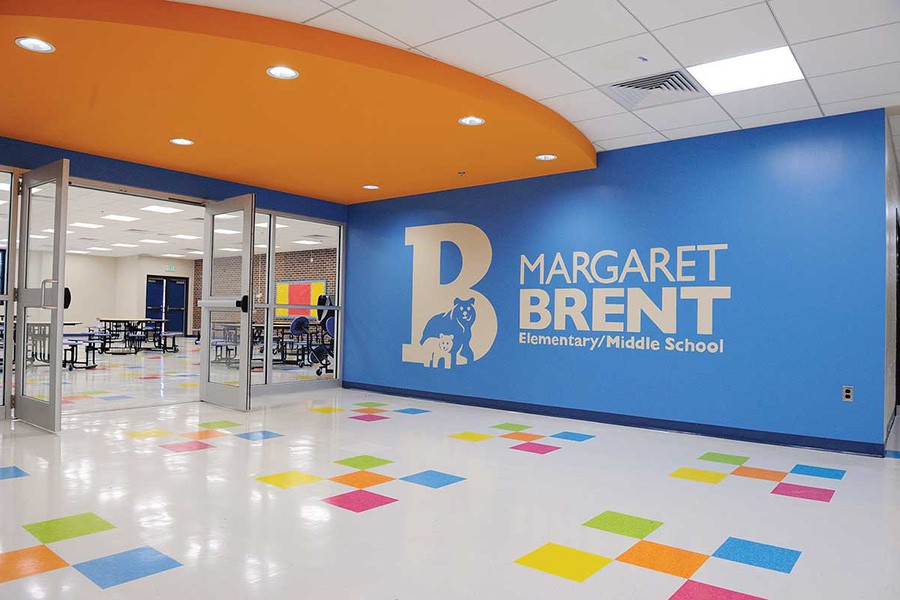 Image caption: Side lobby and cafeteria at the Margaret Brent Elementary and Middle School

More than 750 public school students in Baltimore's Charles Village neighborhood returned to classes this fall in buildings that were safer, more functional, more attractive, and better suited for learning, thanks to $1.6 million in summer upgrades.

In addition, Barclay now has improved handicapped access and a renovated, more efficient kitchen. New doors and a security system were also installed at the former Barclay Recreation Center, attached to the school and now operated by Greater Homewood Community Corporation as the 29th Street Community Center. New renovations at Margaret Brent included heating and air conditioning repairs. The Brent gymnasium has also been renovated, thanks to a separate gift from the family of Baltimore native and Memphis Grizzlies guard Josh Selby.

"Our goal is for these schools to be great choices for all neighborhood families," says Karen Stokes, executive director of GHCC, which over the past three years has put together roughly $3 million in resources to strengthen six north Baltimore schools academically and physically. "For us to build on the progress we've made at Barclay and Margaret Brent, some immediate physical improvements were needed, and we are thrilled that Johns Hopkins and the school system have stepped up."

Barclay and Margaret Brent, both located blocks from the Johns Hopkins Homewood campus, are critical to the Homewood Community Partners Initiative, says university President Ronald J. Daniels. Johns Hopkins has committed a total of $10 million to that project, launched in December 2012. HCPI is designed to reinvigorate 10 area neighborhoods; build a vibrant, livable urban center; and attract 3,000 new resident families over the next 10 years.

The $800,000 that Johns Hopkins contributed to the schools' summer renovations is its largest HCPI expenditure to date. The university also plans to channel funds into academic support for both schools—part of an effort by a variety of partners to make them schools of choice for neighborhood households and an attraction for new residents, including university faculty and staff members. For instance, in November the university supported the launch of a smart classroom pilot program, outfitting one classroom in each of the two schools with tablets, docking keyboards, an ATIV PC for the teacher, and a touchscreen interactive whiteboard to use during daily lessons.

"High-performing schools are at the heart of healthy neighborhoods, and our entire community is stronger for the results of this remarkable collaboration," Daniels says. "That's as good for Johns Hopkins as it is for each one of our neighbors."