The bug and the gaze 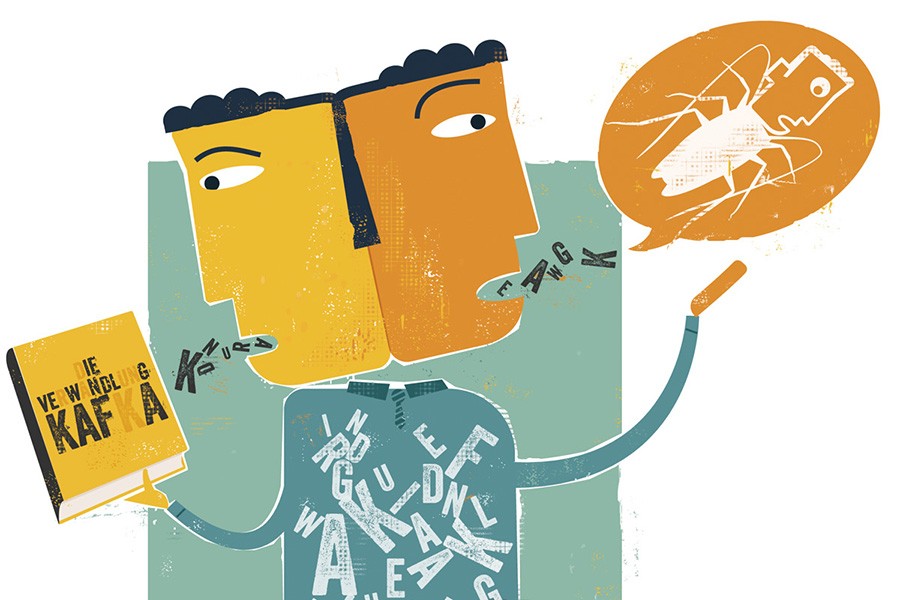 Franz Kafka's The Metamorphosis is a staple of high school reading lists, partly in thanks to its memorable opening line about Gregor Samsa waking from horrible dreams to find himself transformed into a bug. But Kafka didn't say Samsa turned into a bug. In German, Kafka wrote Ungeziefer, which means "vermin" or, more accurately, "unclean beast not suited for sacrifice." In English, Gregor becomes a bug, the entire meaning altered in translation.

"Today I had to translate three Kafka sentences because they haven't been translated [before] and I'm agonizing over it," says Nils F. Schott, expressing the anxiety a scholar feels when taking an author's work from his or her native language and putting it into another. When students and scholars read the English translations of these three Kafka sentences, they'll be reading Schott's interpretation of Kafka. No pressure there. "For another publication, I've translated some sentences from letters by [Gustave] Flaubert and, yeah, that's a little out of my comfort zone. I mean, absolutely, this [translation project] is vocabulary that I'm familiar with, these are lines of argumentation that I'm familiar with, lines of reasoning that I'm familiar with. No problem. But somebody like Flaubert, where every sound counts? That's something quite different."

Schott, A&S '10 (PhD), is speaking by Skype from Paris, where he is a visiting assistant professor of English at Trinity College's Trinity-in-Paris program. When not teaching, he continues tightening up his dissertation for book publication. What he spends most of his time doing, though, are translations of academic writing, from German or French into English and vice versa, which require their own project-specific research. Translators are unsung but crucial workers in academia, guiding ideas across language barriers. It's work that Schott enjoys and takes quite seriously. He chiefly translates what he calls "applications of 20th-century philosophy," a field where the ideas and terminology of key thinkers and writers become set vocabularies in different languages.

Take Michel Foucault, whose use of "le regard" in his 1963 book Naissance de la clinique: Une archéologie du regard médical became "gaze" when Alan Sheridan translated it in 1973 as Birth of the Clinic: An Archaeology of Medical Perception. In a footnote, Sheridan explains how the English word choice doesn't have the same connotations as it does in French. While imprecise, "gaze" became the term used to express Foucault's ideas about power relationships when discussing the French thinker in English. And as other Foucault texts were translated into English by Sheridan (The History of Sexuality) and other translators— Richard Howard (Madness and Civilization), Jean Khalfa and Jonathan Murphy (History of Madness)—Foucault's unique French vocabulary was turned into a set idiom for discussing Foucault in English.

"You might disagree with the translations, but the vocabulary is more or less set," Schott says. "Those are set phrases now and you just work with it."

When he came to Johns Hopkins for graduate school in 2003, he arrived at the same time as a few European professors who hadn't published much in English. Schott was hired to translate their texts. "Eventually, I got my first offer for doing a book translation, and ever since then, they keep coming," he says.

And frequently, the translation informs his own work in unexpected ways. "There are so many times that I'll say, Yes, I'm going to do the book, because it doesn't pay well but I can use the money," he says. "And then I'll start it and [think], 'Oh my God, this is completely useless and it's never going to be useful in any way, shape, or form whatsoever.' Two months later, it's the basis for an entire lecture that I'm giving because it turns out that the poet whom I'm discussing had a mutual friend who inspired a particular poem with the author whose book I have just translated."