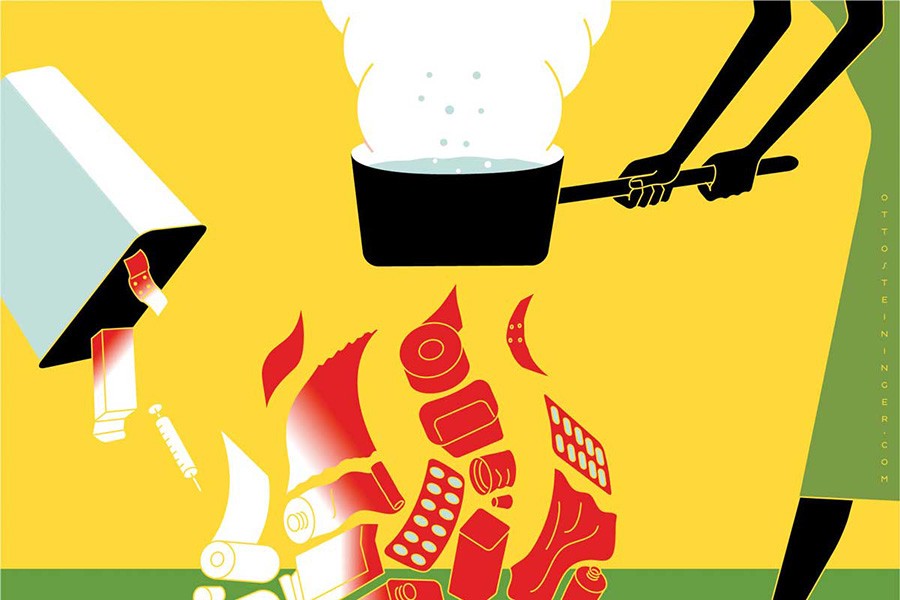 There's a massive waste disposal problem in the hospitals of developing nations.

Hospitals—and maternity wards in particular—produce waste, like used gauze and plastic packaging, that should be incinerated, but that's a costly and unrealistic option for many hospitals. Instead, the waste often ends up in landfills, where it puts people at risk of infections like sepsis, HIV, and hepatitis.

Harshad Sanghvi is the medical director and vice president of innovations for Jhpiego, a nonprofit affiliated with Johns Hopkins that is dedicated to improving the health of women and families in developing countries. He says there's a way to safely and costeffectively dispose of this medical waste, and he's organizing a harambe—the Swahili term for the pulling together of the community—to make it happen.

When the Saving Lives at Birth grant competition asked for proposals earlier this year on ways to reduce infant and maternal mortality in the hospitals of developing countries, the team at Jhpiego, led by Sanghvi, saw the opportunity to partner with an organization that was already making waves with a revolutionary four-in-one contraption.

The Community Cooker—an incinerator that uses discarded motor oil and water to burn garbage at temperatures exceeding 800 degrees Celsius— had already been successfully implemented in a few Kenyan slums to deal with the overflow of trash that lined the streets. But the contraption does more than safely burn waste without emitting toxins. The heat generated in the process can be used to boil water for baths or hand washing, to cook food, and to provide heat to buildings.

The cooker is the brainchild of the Community Cooker Foundation, a nonprofit set up by Jim Archer, one of Kenya's leading architects. Jhpiego proposed placing the cooker in a clinical setting, where it could dispose of germ-ridden medical waste, as well as provide hot, clean water to doctors and patients.

"This is an innovation that's adaptable to the demands of a health care facility and the community," says Boniface Maket, deputy director of Jhpiego in Kenya. "And it's empowering to the community to be able to see that their trash can have an impact—that it can save mothers."

The Community Cooker could have a drastic impact on the spread of infections in hospitals. Fifteen percent of maternal deaths and 25 percent of neonatal deaths are due to sepsis and other infections, according to the World Health Organization. In Kenya, the maternal mortality rate is 360 per 100,000 live births (compared to 21 per 100,000 in the U.S.), and 49 out of 1,000 infants die before their first birthday (compared to six out of 1,000 in the U.S.).

With a roughly $15,000 price tag, the cooker is a low-cost, low-tech solution to a widespread problem.

The team at Jhpiego is working with the Community Cooker Foundation, a hospital outside Nairobi, and the community to implement this technology in a health care setting. Although the idea went to the finals of the grant competition, it did not win. The team must now secure $250,000 to build the cooker, train workers to use it, and tweak the technology for hospitals (they're currently in preliminary talks with one donor). Among the necessary modifications: Engineers must find a way to ensure the cooker consistently burns at 1,000 degrees Celsius in order to safely incinerate medical waste. Researchers are also looking into ways they could save the energy for later use.

The Community Cooker "can really change lives," says Janice Muthui, foundation manager for the Community Cooker Foundation. "As a waste energy technology, this fits in with any setting you have—urban, rural, whatever—as long as you have a steady fuel of rubbish and a community who is willing to try it."

The harambe doesn't end once the Community Cooker goes into the first hospital, Sanghvi says. If successful, the model could be scaled up to other hospitals in Kenya to provide low-cost, low-tech health solutions that would drastically reduce the spread of infection.

Not bad for a product that runs on trash and used motor oil.