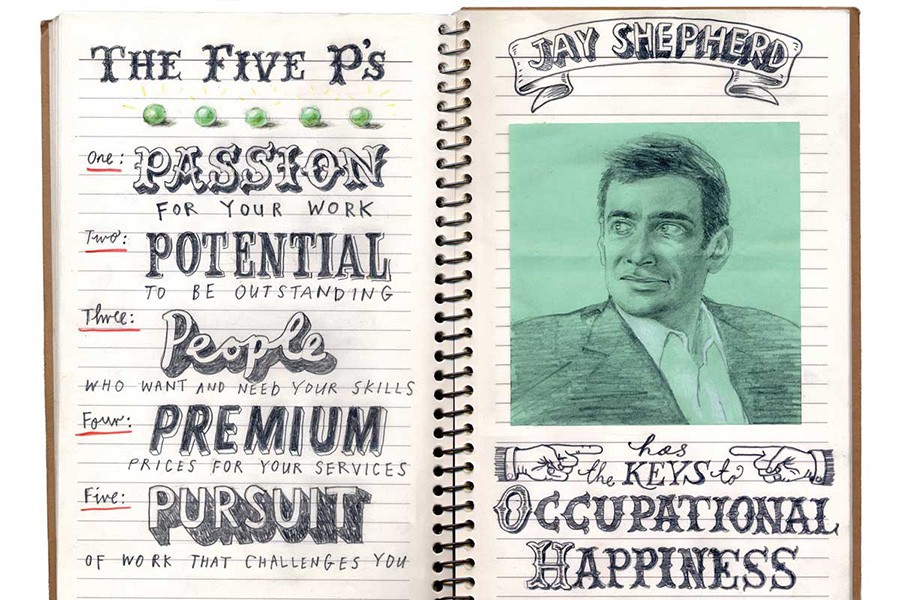 Jay Shepherd, A&S '88, may seem an odd choice of speaker for last May's launch of the Johns Hopkins Law Affinity group in Boston.

After all, he is a self-described "recovering lawyer" who is not afraid to tell a room full of attorneys that, according to Forbes magazine, theirs is the unhappiest occupation in the country. But Shepherd, who ended his 17-year legal career in 2011, is now a writer and motivational speaker who helps professionals—lawyers and everyone else—become "rock stars" at work and love what they do.

That was the goal he had for the members of the Law Affinity community, a group of alumni, students, and friends of the university who are drawn together by common interests and shared experiences.

"I'm not a pied piper talking people out of practicing law," Shepherd says over the phone from his Boston home. "I know some lawyers who love what they are doing."

Shepherd admits he became an attorney almost by accident. For one thing, 1988 was a tough time to graduate with a degree in international studies. "I had a Cold War degree just as the Cold War was ending," he says. After three years of indecisiveness working for a Boston bank, he headed off to law school and wound up becoming an employment lawyer. Shepherd later launched his own firm and became a trade-secret specialist.

"I enjoyed being a lawyer, but I got to a point where I started to lose interest," he says. "It never had been my lifelong dream. My real passion was writing." Today, he has the business book Firing at Will: A Manager's Guide on store shelves.

His speech distills his life lessons down to what he calls the "Five P's" of occupational happiness: passion for your work, potential to be outstanding, people who want and need your skills, premium prices for your services, and pursuit of work that challenges you. "Nobody threw any tomatoes," Shepherd jokingly says of his talk's conclusion before roughly 20 members of the Law Affinity group, who were gathered at the offices of Boston law firm Hinckley, Allen & Snyder LLP.

Jennifer Doran, A&S '98, a corporate partner at the hosting firm, was in that audience and remarks that many of her peers have already followed Step 1 of the Five P's. "Everyone goes to law school, and then people end up in different places," she says. "It's interesting to see the variety of paths that people have taken."