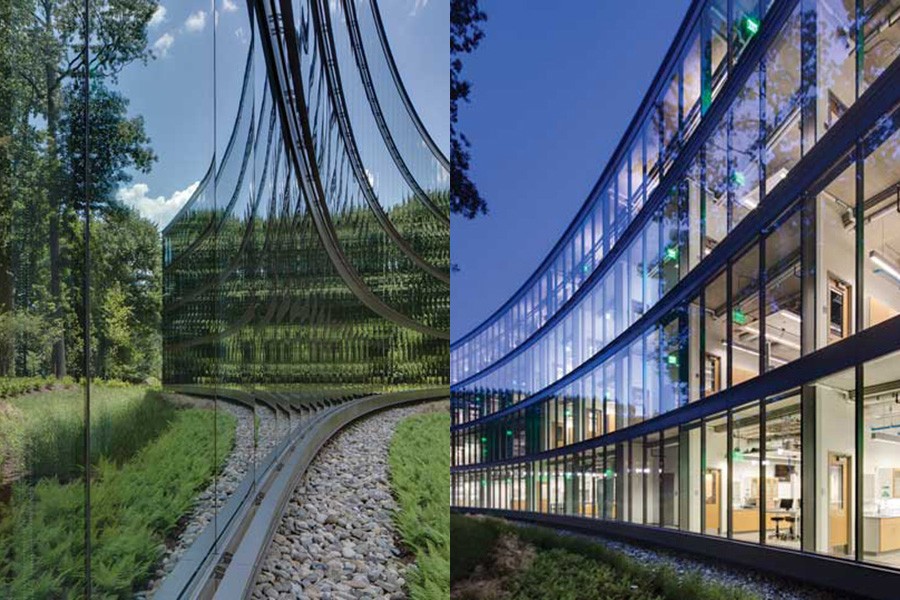 Reflecting on the Abstract

Editor's note: We may have been a little too artistic with last issue's Artifact. The photograph in question is the university's new Undergraduate Teaching Laboratories, a 105,000-square-foot facility that hosts undergraduate labs and faculty in the departments of Chemistry, Biology, Biophysics, and Psychological and Brain Sciences; and the undergraduate Neuroscience program. The image depicts the concave glass facade of the building, which acts almost like a kaleidoscope, reflecting the trees, plants, and sculptures outside the building. Here's another (less abstract) look at the building.

I read Elizabeth Evitts Dickinson's story ["Guns Kill Cops," Fall] on doctoral candidate David Swedler's research into how and why police officers die on the job. In the 1980s, during training as a student and resident at the [Bloomberg] School of Public Health, I attended the first World Injury Conference in Stockholm. Swedish police officers demonstrated to delegates the Kevlar helmets they donned prior to exiting their patrol cars when stopping a vehicle or in various situations where they were at potential risk of violence. Back in Baltimore, I was concerned by the frequently bareheaded officers responding to calls in high-risk neighborhoods around the school, as well as the associated death reports in the media. I wrote to The Baltimore Sun at the time, about 25 years ago, recommending that police in the United States consider Sweden's example in the use of helmets by police. It is good to learn that Swedler's recent research might help to make this a reality.

I am sorry to see that Johns Hopkins Magazine has published "Empty Nest" [about Michael George, SAIS '03, and Chad Lord's experience trying to adopt a baby] [Fall]. Children need a father and a mother to grow normally and happily. This is nature and my firm belief. (I am a father and I have a wife.) Let Mr. George and Mr. Lord do what they want with their lives, but we do not need to hear of them in your magazine.

I read with interest the letter of Vance A. Brahosky in your Fall issue [Dialogue]. He was dismayed that you printed a submission "mocking those Christians that support creationism theory and those on the right of the political spectrum who support former Alaska Governor Sarah Palin and Congresswoman Michele Bachmann." He thought this was a "cheap shot" and advised your magazine to keep its focus fair and balanced.

As for fairness, your magazine did print Mr. Brahosky's letter, though I doubt this assuaged his dismay very much. What's wrong with mocking Sarah Palin and Michele Bachmann? Those [two] should embarrass the right as well as revolt the left.