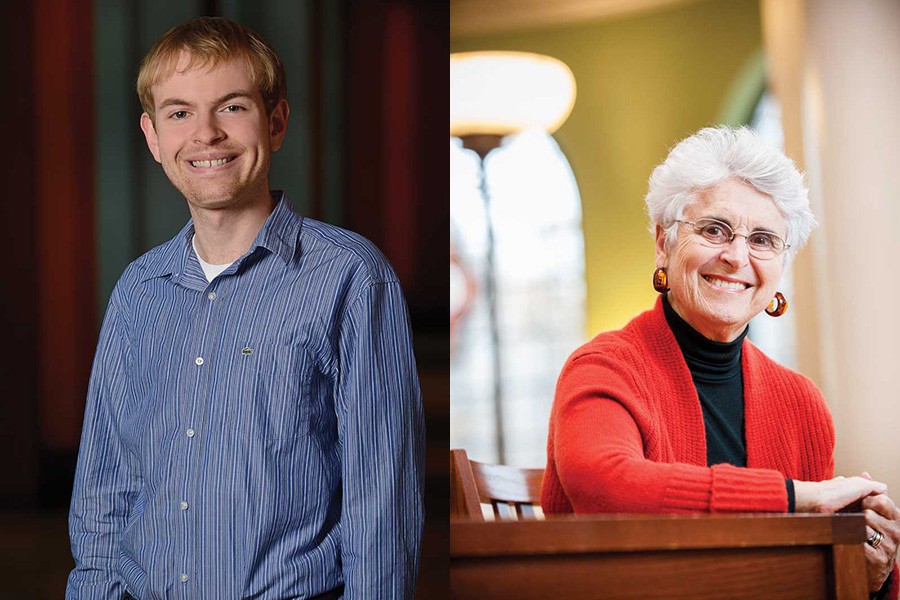 Image caption: Tom Smith is project manager and founder of Project Gado, which creates open-source robotic scanners that allow small archives to affordably and efficiently digitize photographs. Smith conceived of the robots—which can lift individual, often fragile, photos and move them to and from a scanner—and developed the prototype machine while an undergrad. He now sells them around the world, with financial support from the Abell Foundation and other philanthropies. “Gado” means “inheritance” in the West African language Hausa. Jane Guyer is the George Armstrong Kelly Professor in the Department of Anthropology and has been teaching in the Krieger School since 2002. Her research interests include money and culture, social and economic anthropology, and West Africa, where she has extensively traveled. Last year, she won the Distinguished Africanist Award from the African Studies Association for her studies of economic life in West and Central Africa and other, programmatic, contributions to African studies.

Anthropology and robots are subjects rarely lumped together. That they are united by Tom Smith, A&S '11, who became a self-taught robot builder while majoring in anthropology and cognitive science, can be blamed, in a sense, on comedic actor Michael J. Fox. Smith says he signed up for a course in which Jane Guyer taught an invited lecture called "Back to the Future," solely because he was intrigued by its title, a playful nod to Fox's popular trilogy of like-named films. It was his first foray into anthropology. The lecture didn't concern a time-traveling DeLorean car but rather the cultural aspects of money—specifically how the future is thought about and discussed in financial circles. Smith became enthralled with the field, and additional Guyer classes followed, ultimately leading to his dual major and current occupation. And though Smith has been out of school for a couple of years now, he and Guyer still get together regularly for long discussions over dinner or drinks.

Tom I think we kind of connected around complex systems. That was the area that I found most interesting in both majors. In cognitive science, there is more of a neuroscience emphasis. I was really getting deep into the brain's visual systems, and then at a higher level, in thinking about consciousness—about the emergent properties of connections in the brain. And in anthropology, I saw that same kind of thread, the idea of complex systems, but in this instance being cultural or economic.

Jane There's one conversation that I always remember that we had very early on, where I said to Tom, "Have you ever thought about trying to bring this cognitive science and anthropology interest together?" And he said, "Well, can I?" I seem to recall responding, "What do you suppose they pay the faculty for here?" (Laughing) "It's in our job description to cultivate students' interests. If you see a connection, it's part of my job to figure out some way to work at it."

T But it's not something that always happens. I think it is something unique to Hopkins, or at least something that's done very well here. You actively pulled me into the field, which was a fantastic thing to have happened.

J You were fascinated by both disciplines—and inventing robots at the same time.

T Yeah, the robots—Project Gado—grew out of work I was doing in the Anthropology Department and also for the Center for Africana Studies. I was going out into neighborhoods in East Baltimore and interviewing residents in the area around the medical campus that ended up being redeveloped. I wanted photos to capture what the neighborhood and the residents looked like, but the people there historically had not been able to afford cameras, so there weren't any old photos sitting around in people's attics. I ended up tagging along on a project that the Sheridan Libraries here at Hopkins were doing called the Diaspora Pathways Archival Access Project. Its team was working over at the Afro-American newspaper doing an index of their archive. The paper has been around since 1892, and they have this huge archive of photographs. I had no idea it existed—one and a half million photos sitting around in a building over on North Charles Street. The problem was, there was no way to digitize the materials and share them because it was too resource-intensive and they didn't have the staff to do it. I thought about how to solve that problem and ended up coming up with the idea of building a robot that could do the digitization automatically. Over a summer, I hacked together this colossal machine that weighed 200 pounds and filled a whole table, but it could lift photographs and digitize them without damaging them.

J Tom had a proposal, in which I was a reference, to digitize the housing records of Baltimore City, which are in some building in the back of beyond, hopefully not being eaten up by some kind of insect.

T Literally, they had a snake in the archive.

J Then, I have this set of records from Nigerian newspapers that a colleague and I amassed, and I've been talking to Tom about digitizing all of those, which is about 12 file boxes. There is a lot of scholarly material and archival material out there in the community that this kind of technology can make available for study.

T After I graduated I was able to move seamlessly from being a student to working full time on Gado. We've really taken it from this giant thing that filled a desk to a kit you can buy online for $500 and assemble in your own archive. And now it is all over the world. We have robots from Santa Ana, California, to Finland. The iterative, circular logic in anthropology, where you are continuously coming back to the original question and continuously testing and trying things—reassembling the parts and trying something different—is so incredibly similar to the process of running a company, at least in the early stage. I have even come in and talked to Jane's classes about that mode of thought as applied to the business world.

J You have to be constantly responsive to change, to demand, to success, to failure, to shifting parameters, and that's the way we are in our fieldwork. We are constantly responsive to the voice of, and the action by, the population because that's our disciplines' job in the great intellectual division of labor: to keep expanding horizons of knowledge about human capacities for imagination and action in the world.