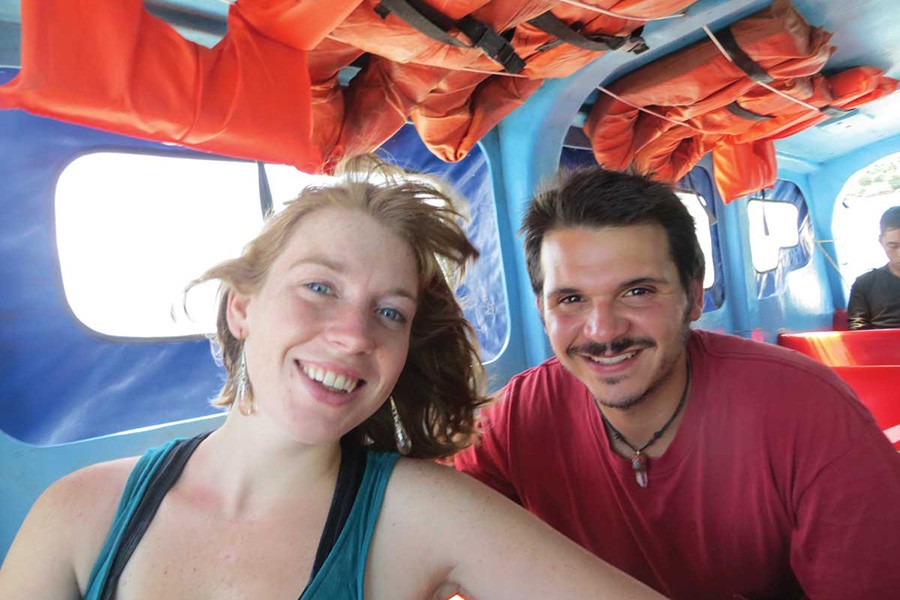 On two and a half acres in the coffee and avocado valleys of western Guatemala, two young alums have found their calling.

Colleen Donovan, A&S '07, met Shad Qudsi, Engr '06, over a game of Boggle in the fall of her freshman year. They began dating while working for a science and technology company in Providence, Rhode Island, after graduation; a year later, they were ready for something new. She wanted to travel. He wanted to farm. So they signed up for Worldwide Opportunities on Organic Farms, a nonprofit network offering volunteer oppor-tunities. In the fall of 2009, they found themselves buying a piece of land in Guatemala.

That land is now a productive farm, but it's literally been a rocky road. The hilly acreage is prone to flooding and is not tractor-friendly. The couple had no electricity for three years, filtered water they fetched from the nearby spring, and slept in an 8-foot-by-6-foot shelter.

"Lots of our friends have started buying houses this past year," Donovan muses. "Remember our first house?"

"I don't even remember where we kept our clothes! What about our toiletries?" replies Qudsi.

"We didn't have any toiletries," says Donovan, laughing.

Gradually, they built additions and now have a home with a bedroom. In 2011, they got married. They have also built a profitable farm inspired by permaculture, a design methodology that favors biological solutions like perennial plants and native insects over herbicides and pesticides. Their farm produces goat dairy products, chickens, pigs, honey, edible and medicinal mushrooms, and more than 60 species of crops.

The goal of the farm, called Atitlan Organics, is nothing less than to catalyze a new form of agriculture—one that is low-input, high-yield, non-capital-intensive, and compatible with small parcels of land. The farm serves as a kind of demonstration project, showing what's possible. Permaculture education led by Qudsi includes on-farm courses, consulting services, and a volunteer program hosting visitors from around the world, including Johns Hopkins University students. "We believe that the current industrial, centralized agriculture system is not healthy and that the future lies in decentralized, small-scale, highly diversified producers that are free and unhindered to sell their products in local markets," Qudsi says.

Meanwhile, Donovan has discovered that her passion lies with young children. She has spent the past two years teaching kindergarten at nearby Escuela Caracol, Guatemala's first Waldorf school, and plans to start her Waldorf teacher training next year.

"It can be hard, living so far away from our families, and I've always felt that if I had come down here by myself, I never would have moved permanently," Donovan says. "But having done all this with Shad has made all the difference. We both feel that these days, Guatemala is our home at least as much as the U.S. is, and though we talk about possibly moving back to the States one day, it certainly won't be for many more years."