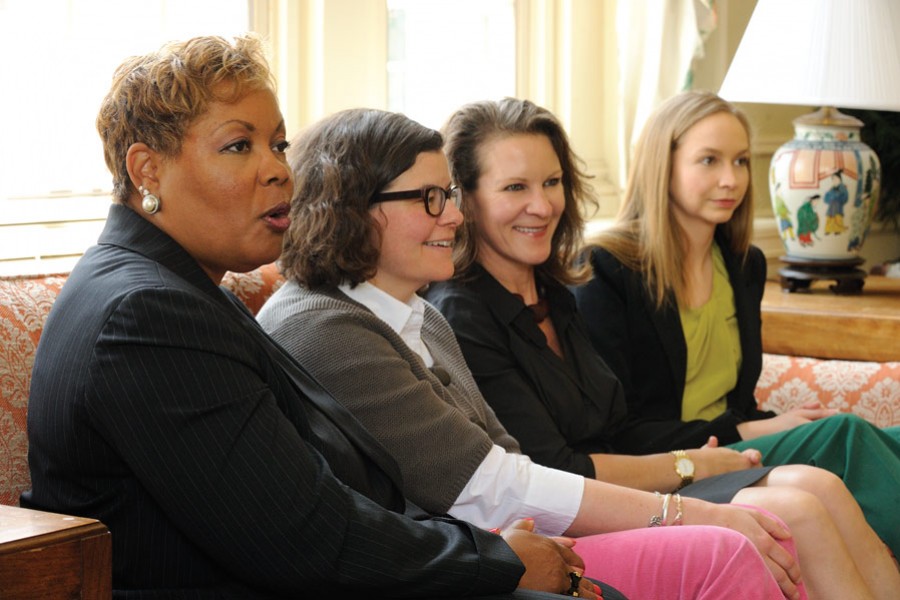 Image caption: Four members of the Women in Business affinity group get together. Since it was launched in 2011, the group has reached some 480 alumni, students, and friends of Johns Hopkins.

As women appear increasingly visible in influential positions, it's all too easy to think that's the new norm. "In reality, it's still not very common," says Robin Schaffer, A&S '10. "It's just important for women to build that network and find a mentor so they can advance their careers."

Schaffer is a member of the Women in Business affinity group, created in October 2011 to provide opportunities for Johns Hopkins women to advance their personal and professional development and to make connections with one another. Through events such as networking receptions and panel discussions, the group brings together women in the Baltimore-Washington-Northern Virginia area to discuss topics of interest, share resources and experiences, and network with professionals at all stages in their careers.

"We have all these really smart, successful women at Hopkins, but there hasn't been an accessible way for them to make connections with each other," says Elena Thompson, senior associate director of affinity engagement, who launched the group along with assistant director Ridia Anderson. By cutting across traditional alumni boundaries, such as year of graduation and university division, the group has reached some 480 alumni, students, and friends of Johns Hopkins with mutual interests rooted in their current lives and professions. The shared educational background of Hopkins provides a common thread, says Schaffer, reminding her of the camaraderie she felt on the swim team as an undergraduate.

The group focuses on creating the kind of environment where some spark may ignite, whether it's something a speaker says or a conversation between two members who happen to sit next to each other at an event. Building on input from members and participants, the Women in Business committee tries to identify topics for activities that will speak to the membership—work-life balance, entrepreneurship, and negotiation skills, for example—and leave plenty of time for relationships to develop, since networking is always a component.

After attending a recent event, Danielle Tergis, Bus '08 (MS), says she was already familiar with the suggestions about opening separate savings accounts for specific purposes, creating multiple income streams, and setting goals by writing them down and sharing them out loud. But somehow, when she heard the same advice at the Remarkable Women: Leadership Strategies for 2013 conference in March, it hit home more powerfully. "Within hours, I started doing it," she says.

Members say there's a positive vibe to the group that makes them feel safe to engage in deep discussions and share real experiences. "That puts you in a different mindset; you're just more open to things," Tergis says.