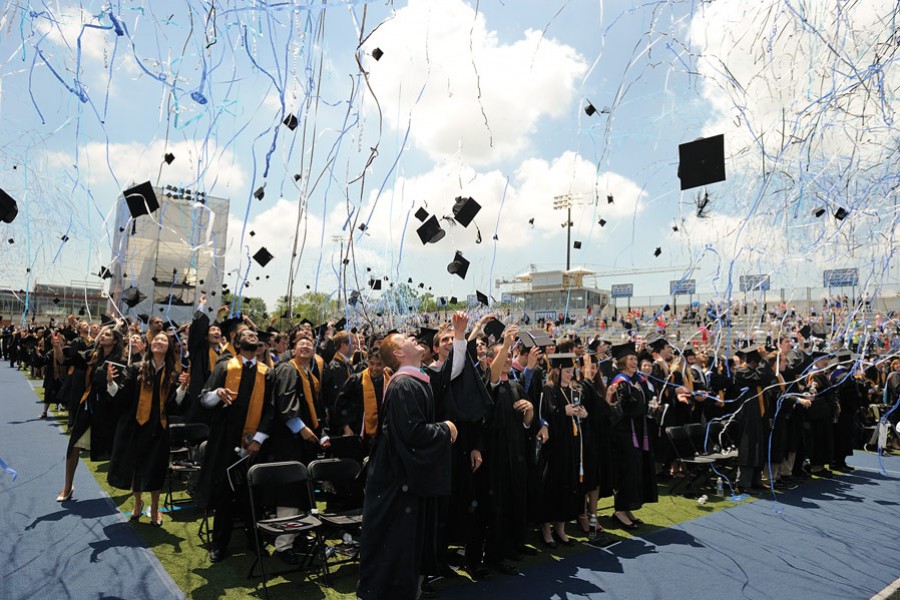 Image caption: If you think theyre happy, you should see their parents

In the weeks leading up to graduation, members of the Class of 2013 offered some advice to underclassmen in the form of a bucket list—things you shouldn't miss before graduating from Johns Hopkins: "See an astronomical event from the telescope at Bloomberg," "Enjoy the view from Gilman tower (legally)," "Make a real connection with someone in the Baltimore community," "For Pete's sake. Go to the Museum of Art."

In May, those graduates officially joined the ranks of Johns Hopkins alumni. At press time, there was a total of 7,185 degrees, certificates, and diplomas to be awarded at the universitywide commencement ceremony, traditionally held outdoors on Homewood Field.

Renowned Johns Hopkins neurosurgeon and neuroscientist Alfredo Qui&ntilde;ones-Hinojosa was the featured speaker at the May 23 event, addressing graduates from all divisions and campuses of the university. Born in Mexico, Qui&ntilde;ones-Hinojosa came to the United States at the age of 19, working as a farm laborer, painter, and railroad welder to pay for his education. After receiving his bachelor's from the University of California, Berkeley, he went on to graduate with honors from Harvard Medical School, joining the faculty at Johns Hopkins in 2005. As a professor of neurosurgery and oncology, Qui&ntilde;ones-Hinojosa is known for his cutting-edge cancer research as well as his easygoing, comforting manner with patients.