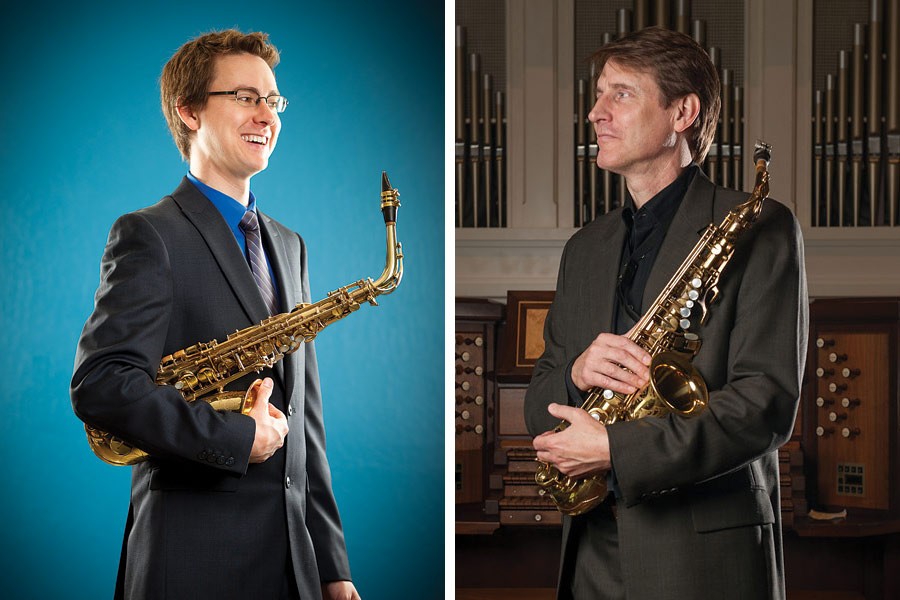 Image caption: Michael Straus is a San Franciscobased saxo­phonist, improviser, composer, writer, and arts organizer. A former Fulbright fellow to Amsterdam, this fall he will be relocating to the Midwest as the newly appointed assistant dean of technology and facilities at the Oberlin College Conservatory of Music. Earlier this year, he was selected to receive Johns Hopkins Outstanding Recent Graduate Award. Gary Louie is professor of saxophone at the Peabody Institute and an internationally recognized performer. The recipient of numerous awards and grants, he has performed at Lincoln Center in New York City, as a soloist with the National Symphony Orchestra at the Kennedy Center in Washington, D.C., at LOpera Comique in Paris, at the Villa Medici in Rome, and many other locations worldwide.

Unlike, say, violinists, classical saxophonists have never been able to count on seats in orchestras, slots in recital series, chairs in chamber groups, or even centuries of repertoire to explore. In the art-music world, these reed players have had to manufacture their own opportunities by transcribing old works from other instruments, commissioning new works, pulling together chamber groups with saxophone chairs, and organizing new series and festivals.

This historical necessity and the inventions it mothered have served saxophonists well. In an era when traditional performance opportunities are shrinking, reed players are ahead of the curve when it comes to finding alternative ways of getting their music to audiences. When Michael Straus, Peab '07 (MM, Saxophone), '07 (MM, Computer Music), came to the Peabody Institute in 2005 as a graduate student in classical saxophone, he was already thinking that way, and he found a mentor in Gary Louie, who not only taught the saxophone but also introduced the Conservatory's pioneering course titled The Business of Music, which he co-taught with Bill Nerenberg from 2002 onward.

Today Straus and Louie are still inventing new ways to put their instruments in front of music lovers. Straus, the director of operations at San Francisco's Other Minds, a nonprofit new-music organization, has formed unusual chamber groups, not only with other wind instruments but also with robots. Louie continues to commission new works for the alto saxophone and performs those works all over the world. Recently they got together to share some ideas.

Michael What I'm about is creating a scene that didn't exist before. At Other Minds, I'm in charge of the record label, fundraising, running the film festivals, and producing a large annual new-music festival. And it's a different kind of festival, because we've seen what happens at other festivals, where people fly in and fly out without really interacting. When a composer signs on for ours, they sign on for eight days, and the first five are spent at this camp out in the redwoods, in cabins on a cliff looking over the ocean, where you can trade ideas without any critics around looking over your shoulder. All the skills I learned at Peabody apply to what I'm doing now.

Gary Those of us at music schools are doing a good job with our primary mission of teaching students how to play their instruments. But we're not doing such a good job at our secondary mission, which is helping young musicians find valid roles as artists in our society. We need to empower our students, so they can "own" their music, so they're not just employees but entrepreneurs. I was adamant in raising my voice, and we finally got a full-time career person at Peabody who does nothing but prepare students for life after graduation: Gerald Klickstein, the director of the Music Entrepreneurship and Career Center, who's brilliant.

M For my generation, the teaching jobs are drying up and are harder to get. By the mid-2000s, when I finished my undergraduate degree, a lot of these conservatories prepared students to play a great solo for their auditions, but they didn't teach them how to survive in the real world. At Peabody, they did, thanks in large part to you. I learned how to handle contracts and copyrights; I learned how to raise money, how to design a Web page, how to organize an event.

G If you're a string player and all you've ever done is prepare for an orchestral seat, what do you do when there are fewer of those available? I say to my students, "What are you going to do for the 10–15 years till you get that seat?" Maybe because saxophonists have never prepared ourselves for an orchestral position because we have never expected anything to begin with, we're in a better position to adapt to this new world.

M When I was at Peabody, I saw a bunch of students going in and out of these rooms filled with electronic gear. Greg Boyle [Peab '85 (MM), '90 (DMA)], who I eventually studied with, said that Peabody had a very strong graduate program in computer music. I had been interested in the field during my undergraduate years, so I asked if I could sign up for the performance track of this degree. During this same time, I was working with a small group of composers in Charlottesville, Virginia, which led to a collaboration with bassoonist Dana Jessen and EMMI [Expressive Machines Musical Instruments]. These guys build wind and string musical robots that we eventually toured with throughout the U.S. and Europe.

G I'm also trying to create things that didn't exist before, though on a smaller scale. I'm trying to get a concerto off the ground. It's tricky, because a good concerto costs $30,000–40,000. I know it's going to be a valuable project, but you have to get people on board and meet deadlines, or it's not going to happen. If someone says, "I don't want to fundraise; I just want to play music," I say, "You better get into an ensemble where someone else has those skills because someone has to do that."

M Seventy-five percent of the music I play is music I've been involved in creating. The model of the last century where you give someone a commission and nine months later they give you a score doesn't fly anymore. This back-and-forth with a composer that happens over months and years is very exciting. The person is alive; I can talk to them and work with them. Young composers aren't as busy as they will be later in their careers, so you can get a larger proportion of their time.

G In the beginning it's a dance; you're both figuring out if you can work together. When a composer gives you something, they're trusting you to take care of the music. But you also have to trust the composer, that he's not going to hang you out to dry. Michael Hersch [Peab '95 (MM)] wrote Last Autumn for me in 2008. It's epic: two and a half hours of saxophone and cello. Michael first heard me play it, he went back and rewrote it because he knew what I could do—not just technically but also aesthetically. And when he wrote a second piece for me, of ages manifest for solo saxophone, it was even more personal.