Principles and practice of friendship 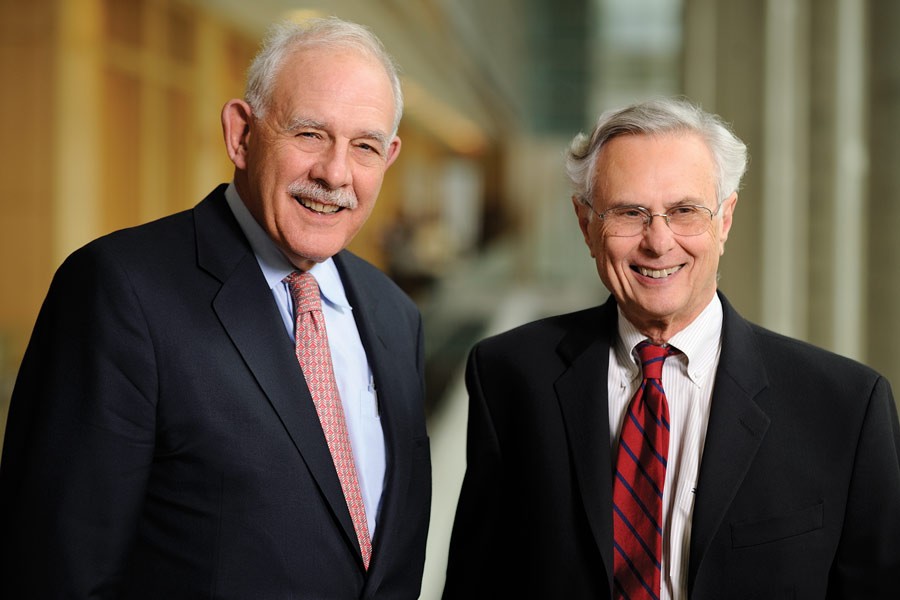 On the corner of East Monument Street and Broadway in East Baltimore, a tiny, three-story apartment building stands out amid the ever-developing zone of Johns Hopkins Hospital as a quaint reminder of the neighborhood's past. In the early 1960s, the building's second floor was home to Myron Weisfeldt, A&S '62, Med '65, and Barry Strauch, A&S '62, Med '65, third-year medical students who, after their first week there, almost got evicted for throwing an overly rambunctious spaghetti party. "One of us, and I know it wasn't me," says Strauch, "allowed a washcloth to go down the drain."

Today Strauch is chairman emeritus of the Department of Medicine at Inova Fairfax Hospital in Virginia. He also serves on the board of trustees of Johns Hopkins Medicine, and with his wife supported the construction of the Strauch Auditorium on the medical school campus. Weisfeldt is chair of the school's Department of Medicine. "We have not made a big point of telling everybody that we are longtime friends," says Weisfeldt, "but every once in a while at trustee meetings we have lunch together."

As students, Strauch and Weisfeldt were part of an old preparatory program that accepted students after just two years of undergraduate education. They would spend half the semester finishing their prerequisite courses at the Homewood campus and the other half at the medical school itself.

The accelerated program was eventually discontinued—on the assumption that it did not produce more meritorious students, Weisfeldt says—but it prepared Weisfeldt and Strauch for what turned into highly accelerated careers. Strauch, early in his work in nephrology, became instrumental in spreading the emerging practice of dialysis to hospitals around the United States. Weisfeldt, meanwhile, became director of the Division of Cardiology at the School of Medicine in his mid-30s, where he was part of the team, led by Michel Mirowski, that implanted the first defibrillators in humans.

The pair has lived up and down the East Coast—Strauch has worked at Yale University and the National Institutes of Health, Weisfeldt at Massachusetts General Hospital and Columbia Presbyterian Medical Center—without ever losing touch. Their families have vacationed together in Bethany Beach, Delaware, for decades, and the Strauches host Thanksgiving dinner every year for the Weisfeldts.

At Thanksgiving in 2001, Strauch gave Weisfeldt, who had recently become the William Osler Professor of Medicine at Johns Hopkins, a gift that he'd been hoping to give him for years—a first edition of Osler's famous textbook, The Principles and Practice of Medicine, first published in 1892. (William Osler was one of Johns Hopkins' four founding doctors.)

"My plan when I bought it 22, 24 years ago was to give it to him when he became the Osler Professor of Medicine," Strauch says. "I said there's no way he could be in that position and not have that book."