Rising to the challenge

Johns Hopkins aims to advance human knowledge, solve global problems, and enhance the student experience with $4.5 billion to be raised in a new campaign, announced in May. 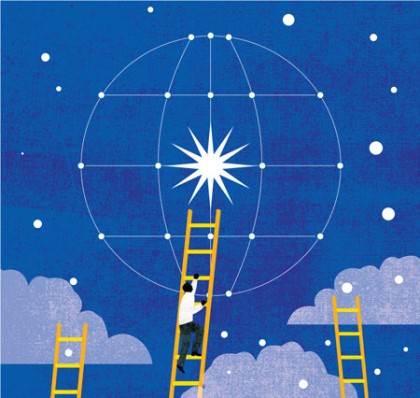 Encompassing both the university and the health system, this joint fundraising effort—the institutions' largest ever—is called Rising to the Challenge: The Campaign for Johns Hopkins. It seeks to create as many as 300 endowed professorships and generate $753 million for financial aid and fellowships. It also will support interdisciplinary research teams seeking answers to vexing worldwide problems in areas such as health, education, water resources, and revitalization of cities.

The campaign has raised $1.94 billion, or 43 percent of the goal, since its "quiet phase" began in January 2010. Now that it has been publicly announced, the aim is to complete the effort in 2017.

"Humanity today confronts both age-old questions and burning new ones unlike any we have faced before," says university President Ronald J. Daniels. "Our job at Johns Hopkins is to rise to the challenge, to develop the tools and the talent, and to help humanity resolve those questions—on our campuses, in our communities, and around the world."

The campaign will be built on three pillars. The first is "Advancing Discovery and Creativity." Since its founding in 1876 as America's first research university, Johns Hopkins has in many ways defined modern higher education, linking teaching and research in all disciplines, from the humanities and arts, to public health and medicine, to science and technology. Funds will be strategically invested in programs and activities that advance the university's core academic mission and allow it to embrace tomorrow's opportunities and meet its problems.

The second pillar is "Enriching the Student Experience." Rising to the Challenge will strengthen financial aid in the form of scholarships and stipends, invest in inspirational spaces for collaborative learning and social interaction, and build new programs that enrich the academic experience, ensure diversity, and strengthen connections between Johns Hopkins and its surrounding communities.

The third is "Solving Global Problems as One University." Complex social, political, economic, and environmental issues threaten the progress of nations and communities around the world. As a leader in creating the cross-disciplinary solutions such problems demand, Johns Hopkins will draw on its tradition of innovation to launch new "signature initiatives" in individualized health; the science of learning; the potential of our urban centers; the sustainability of water resources; and global health.

A major milestone in the quiet phase of the campaign was the commitment in January of $350 million—the largest single gift in Johns Hopkins history—by philanthropist and New York City Mayor Michael R. Bloomberg, Engr '64. That gift is divided between student aid and endowment for 50 Bloomberg Distinguished Professors promoting collaboration across traditional academic disciplines.

"Mike Bloomberg's generosity and dedication to the Johns Hopkins mission are inspiring," says Jeffrey H. Aronson, A&S '80, who, having led the campaign's quiet phase, will pass public phase leadership to new co-chairs Heather Murren, A&S '88, and Charles Clarvit, A&S '78, and become the next chair of the university's board of trustees. "I know that there are many thousands of alumni, parents, patients, and other supporters who find our mission as compelling as Mike does," says Aronson, who is a parent of two current students. "They will, just as he did, rise to the challenge."

"At Johns Hopkins, we are driven to discover," says Paul B. Rothman, the Frances Watt Baker, M.D., and Lenox D. Baker Jr., M.D., Dean of the Medical Faculty, vice president for medicine, and CEO of Johns Hopkins Medicine. "The formula for success is deceptively simple: Find the best faculty members, bring them together, surround them with the best students and staff, and give them the resources they need to unleash their imaginations and dare to discover. This campaign will enable us to do all that, and to do more for our patients and for the world than we ever have before."

Looked at another way, half the total campaign goal—$2.25 billion—is for research and program support. Another $968.5 million is for faculty support, including about 150 endowed professorships in the School of Medicine and 150 more throughout the rest of the university.

About 9 percent is for buildings and other capital needs, contrasting with 18 percent of the total that was raised in Knowledge for the World, the $3.741 billion Johns Hopkins campaign that ended in 2008. At the time, it was the second-largest completed campaign in U.S. university history.

"Rising to the Challenge is focused squarely on Johns Hopkins people," Daniels says. "We have done an amazing job over the past decade or so at building some of the best facilities in the world. This time, we are emphasizing support for the scholars, the mentors, and the learners who do some of the best work in the world."

There are, however, some critical facilities projects in the campaign plan, including new buildings for the Bloomberg School of Public Health and the School of Nursing, and renovations at the Paul H. Nitze School of Advanced International Studies.

Also included in the Rising to the Challenge goal is a total of $700 million for five signature initiatives, universitywide efforts identified by university deans and directors and President Daniels as ripe for interdisciplinary collaborations.

"Increasingly, the most significant discoveries come not from a single lab," Daniels says, "but from experts across a wide range of fields, bringing their own perspectives and skills to a combined effort that is far more than the sum of its parts. That's the approach we are taking with these initiatives."

Additional signature initiatives may be added during the campaign as new opportunities for interdisciplinary efforts arise.

For more about the Rising to the Challenge campaign, go to rising.jhu.edu.

Rising to the Challenge Signature Initiatives

The Johns Hopkins Institute for the American City ($100 million)
Faculty from across the university—together with urban scholars and leaders from the private sector, foundations, and governments—will develop and test solutions for fostering economic growth, improving schools, reducing violence, and revitalizing Baltimore and other U.S. cities.

The Johns Hopkins Global Health Initiative ($100 million)
Experts from the fields of public health, medicine, nursing, engineering, economics, and public policy will build a "pipeline of discovery" to advance international efforts in the areas of noncommunicable diseases, injuries, infectious diseases, nutrition, and the health of women and children.

The Johns Hopkins Institute for Water ($100 million)
Experts in public health, medicine, nursing, bioethics, engineering, economic development, and public policy will collaborate to protect our most precious natural resource by modernizing infrastructure, exploring water's complex role in the environment, improving the health of waterways, and sharpening responses to natural disasters.