Detectives in the theater of images 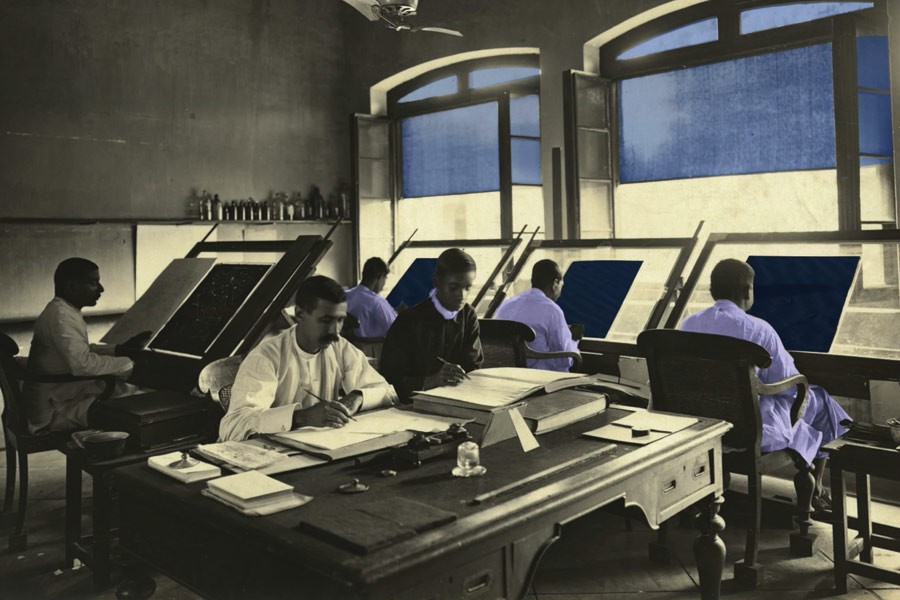 Image caption: A still image of Indian surveyors, from the Raqs Media Collective video installation An Afternoon Unregistered on the Richter Scale.

In the Baltimore Museum of Art's Black Box gallery a silent animation is projected onto a wall. Its three and a half minutes play in a continuous loop, and at first it looks merely like an old photograph with parts tinted purplish blue. In the photo, six men sit at drafting tables frozen in work, writing implements held over blank pages. Soon, however, the eyes detect a number of subtle movements. The ceiling fan turns at irregular intervals and speeds, like a pair of clock hands haphazardly marking time. A book's pages rustle as if a gust of wind had sneaked in through the open windows that run along one side of the room. And just outside those windows a man passes by like somebody accidentally walking through a movie set.

Wall text reveals that the original image is a 1911 photo by James Waterhouse that features surveyors making maps in colonial Calcutta, India, which lends a dry humor to these animated tweaks. Titled An Afternoon Unregistered on the Richter Scale, this single-channel video installation quietly becomes a witty commentary on the act of nation building: Here colonized workers create the geopolitical lines that would define a country and its conflicts for the next century, but this act of institutional power looks as innocuous as a family snapshot.

Afternoon was created by the Raqs Media Collective in 2011, and on a weeknight in March, Shuddhabrata Sengupta, one of Raqs' members, projected a still from the animation onto a screen in the Mattin Center's Digital Media Center for a small group of undergraduates. He wanted the students to think about an archival image as a crime scene, to get them to consider the stories behind everything captured in the frame. "Photos leave clues," Sengupta says. "Even the best criminal leaves clues for the detective to follow."

Those clues point in two directions—back, to whatever led, say, a person or an item of clothing to the moment captured in the photograph, and forward, to wherever that person or item of clothing may wander after that. The artist can imagine those stories through the artwork itself—a process that makes time as pliable as clay. Raqs—Sengupta, Jeebesh Bagchi, and Monica Narula—have been exploring how the past haunts the present since they formed Raqs in 1992 in New Delhi, India. At the Digital Media Center, Sengupta cheekily switched between the Waterhouse photo appropriated in Afternoon and a photo of Indian cartographers taken in the 2000s. Save for a few changes in clothing and new technology, the work stations, room, and workers look remarkably unchanged.

Raqs started as a documentary filmmaking team but has evolved into an impressive hybrid. One part is a research unit that writes papers, curates art exhibitions, and co-launched a social science and ??humanities research center at the Centre for the Study of Developing Societies in Delhi. The other part is a creative hub that orchestrates site-specific multimedia installations and performances that have been included at a number of international biennials and commissioned by museums. Raqs was the inaugural artist-in-residence at the Johns Hopkins Center for Advanced Media Studies, and during their monthlong residency on the Homewood campus, its members attended classes, met with faculty, installed two video pieces at the BMA and gave an artist's talk, and conducted this workshop at the Mattin Center, offering students a crash course in creatively exploring and exploiting archival images.

After talking about Afternoon Sengupta and Bagchi invited the students to play detectives themselves. The students turned to computers in the DMC and searched online archives for photos. When they found one that caught their eye, Raqs asked what they would do with it if they were the artists. What does the photo say about how people live now? Is the image the beginning of a story or the end? "That has been our major obsession, how to play with time, how to break away from a progressive idea of time," Bagchi says. "Everything is open to a great investigation in time."

This playful approach to visual literacy made Raqs an ideal choice for CAMS' first residency. Housed in the Department of German and Romance Languages and Literatures and collaborating with faculty in anthropology, political science, and film and media studies, CAMS was formed in 2010 to encourage the university's humanities research efforts in an emerging field that wallpapers everyday life.

Moving images aren't the exclusive realm of television, movies, and museum installations anymore; they're the dominant form of communication, from video games to branded content to animated GIFs and Vine, the mobile app than allows users to post six-second moving images. They travel across geopolitical borders and language barriers more easily than verbal communication. And the media-consuming, mobile phone–owning, meme-creating, social media–connected population living right now has one of the most sophisticated visual vocabularies in history.

The questions Sengupta asked the students to consider as artists, he said, they already consider as mass consumers of images. Every day we come across images that spark a laugh, push a political button, tug at heartstrings, remind us of where we've been, who we love, what we want. Shouldn't we consider how these images are interacting to influence how we remember who we are, individually and collectively?

"Working with [images in] archives is a very emotionally loaded field because an image is a piece of theater," Sengupta says. "And in theater, everything is an actor."