If you have ever been hospitalized, then you have had the experience of scanning an itemized bill that includes a list of tests that you or your insurance provider now must pay for. Leonard Feldman, an assistant professor of internal medicine and pediatrics at the School of Medicine, knew that some med schools try, without much success, to teach future physicians to consider costs when deciding whether to order blood cultures or urine toxicology screens or serum immunofixation. Might there be a better way? 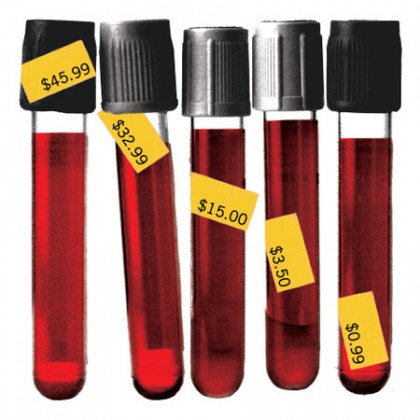 As program director of the Internal Medicine-Pediatrics Urban Health Residency Program at Johns Hopkins Hospital, Feldman observes residents in action, as do a number of his colleagues. "There seemed to be a lot of tests that we thought were being ordered unnecessarily," he says. "We wondered if there was some easy and exportable way to teach, or at least remind, our residents that there is a cost to everything they do. We thought if they saw a connection between the tests they were ordering and cost, they might think twice about whether that test was actually needed." So for a study recently published by JAMA Internal Medicine, he and his co-authors took 61 diagnostic laboratory tests and randomly assigned 30 to an active group and 31 to a control group. When a test from the active group appeared on the hospital's computerized order entry system, the information on the screen included the cost, based on Medicare's allowable fee. For the 31 tests in the control group, no cost appeared. Tests ranged in cost from $3.46 for serum hemoglobin to $238.62 for hepatitis C genotype.

For six months, the researchers monitored orders for the 61 tests (displayed as usual without any cost information) to establish a baseline. Exactly one year later, for six more months they listed the costs of the 30 lab tests of the active group. Residents ordered 600,493 tests during the six-month experimental period. Feldman and his co-authors found that when residents could see the cost of a test, they ordered 8.59 percent fewer labs versus the preceding baseline period. For the tests in the control arm—no cost information provided—not only was there no decline, but orders rose 5.64 percent versus the baseline.

Feldman says he had anticipated residents cutting down on the most expensive tests when they saw how much those tests cost. Instead, it was fewer orders for some of the most routine and cheapest labs that made the most difference, producing a net reduction in hospital charges of $489,383 in only six months. But Feldman emphasizes that more than money was saved. Fewer tests mean fewer needlesticks for blood draws, he says, and fewer problems with false positives, which can be needlessly alarming and expensive for patients. "This is the sort of thoughtful ordering of labs that we want to see," he says. "Just get the information you need, not all the information you can just because you can."

Feldman says, "We keep seeing the cost of medicine go up year after year in the United States. A good bit of that has to do with the way we practice medicine." Such as ordering tests with no awareness of cost. "We need to take control of the situation and be held accountable for what's going on." He adds a note of caution: This was one test at one hospital. He cannot say if the effect observed in this one trial is generalizable to other health care centers. Nor can he say if the change in residents' behavior would have lasted over a longer period. Posting costs on the order-entry system was new to the residents, so it got their attention. After 18 months or two years, would they still be influenced by that information? Feldman hopes so. "We're never trained to think about a cost-conscious, high-value approach to medical care. Doctors just tend to order whatever they want without thinking about it. That's probably not the best way to practice medicine, but it's been part of the culture for decades and decades."