On the morning of November 8, 1943, 25 nurses and medics from the U.S. Army's 807th Medical Air Evacuation Transport Squadron boarded a transport plane on Sicily's east coast. They were heading about two hours east to Bari, where the British 8th army was stationed. The MAETS, a recently formed squadron of male medics and female nurses trained to evacuate the sick and wounded from field hospitals, supported that Allied base. 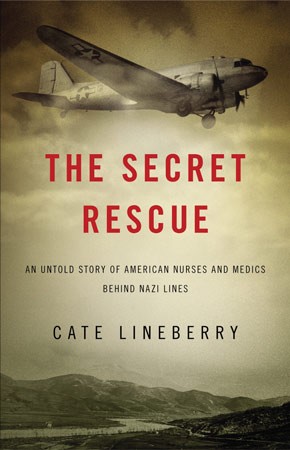 They never reached Bari. A storm forced the plane across the Adriatic Sea to Nazi-occupied Albania. The plane crash-landed, and for the next few weeks—and, in a few cases, months—the U.S. forces were fed, housed, and hidden by Albanian villagers as British and U.S. intelligence officers plotted their rescue. This little-known feat of human resilience receives the serious-history treatment from journalist Cate Lineberry in The Secret Rescue: An Untold Story of American Nurses and Medics Behind Nazi Lines (Little, Brown and Company, 2013).

Building on interviews and discussions with Harold Hayes, the sole surviving member of the flight, who was a 21-year-old medic in 1943, Lineberry, A&S '09 (MA), painstakingly recreates the 807th's ordeal. In addition to traveling to Albanian villages and speaking with men who were young boys at the time of her story, she combed through newspapers, documents in armed forces registries and historical archives, memoirs and notes from other medics and nurses in the 807th, and corroborating interviews, meticulously annotating the entire book.

Such tireless legwork results in an impressive feat of history, though all that detail—the taste and texture of what they ate, the severity of lice infestation, the fact that Mount Nem&euml;r&ccedil;k&euml;'s highest peak rises more than 8,100 feet above sea level—can make this a sometimes slow read. Though, to be fair, that impression might come from the fact that, while reading, the mind is busy casting, storyboarding, and scoring the gripping action-film adaption this story all but demands. Hollywood is always looking for new unsung heroes and, as Lineberry notes, over the course of the war, the MAETS would transport more than 1 million troops, losing only 46 patients in flight. Producers wanting a ready-made story where the historical research has already been done, look no further.