After the Civil War, the victorious Union was surprised to discover how much property was held by Southern slaves, who had no rights yet often owned tools, livestock, clothing, and even land. The quantities were enough to prompt formation of the postbellum Southern Claims Commission to make reparations for property lost to the Union army during the war. Allowing slaves to own a few meager things of their own might seem like a form of leniency—even if whatever slaves owned was at the whim of their masters, who might appropriate it at any time and leave them with no legal recourse. But Dylan C. Penningroth cautions that such occasional displays of apparent leniency were less about humanity than self-interest. 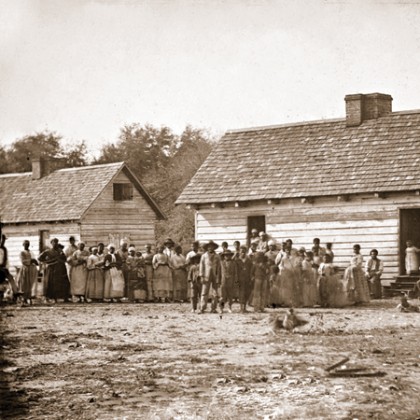 Penningroth, A&S '96 (MA), '00 (PhD), has spent the past 20 years researching slave-owned property, going back to his graduate work at Johns Hopkins. In poring over Reconstruction-era records to fashion a cultural and social history of African-American property ownership, he arrived at a less generous conclusion about why slave owners permitted it. "From the master's perspective, maybe the biggest reason to let slaves have possessions they could think of as property was that it saved on the bottom line," Penningroth says. "The masters were responsible for feeding, clothing, and housing slaves, and something like 20 percent of a cotton plantation's output was spent on that. Letting slaves have property shifted a lot of that burden onto the slaves themselves. So they'd work in the fields all day and into the night, come home, and work some more—making brooms, feeding pigs, growing corn, things like that. The slaves did that because it gave them a more rounded and healthful diet, which should not be underestimated since they might be given nothing more than pork fatback and moldy bread. But the masters let them do this because it was good [economically] for the slave system."

Penningroth was already interested in African-American history as related to property when he began his graduate career at Johns Hopkins, an interest that blossomed when his adviser put him on the track of the Southern Claims Commission. Property is as much a social construct as a physical object, and the idea of slaves owning property raised some peculiar legal questions with elements of squatter's rights and underground barter economies. In the years before the Civil War, Penningroth says, Southern judges had always carefully avoided using the word property in their rulings, instead referring to things owned by slaves as possessions.

Whatever the authorities called it, the property in question never amounted to much. "A typical award from the Southern Claims Commission might be $150," Penningroth says. "Multiply that by a factor of about 15 to get a figure in today's dollars, and it's around $2,250. That's not enough for a down payment on a house, say. We're talking about people working to the point of making themselves sick, and they were still among the very poorest and most destitute of all Americans. Yet they kept at it."

Penningroth's research has already yielded one book, The Claims of Kinfolk (University of North Carolina Press, 2003), which won the Organization of American Historians' Avery O. Craven Award in 2004. He has continued his research while teaching legal history at the University of Virginia and at Northwestern University, expanding the time frame into the mid-20th century and using local trial court records to construct what he calls "very much a bottom-up legal history" of African-Americans. That work got a boost last year when Penningroth was one of 23 people to be awarded fellowships from the John D. and Catherine T. MacArthur Foundation. The fellowship will pay out $500,000 over the next five years, allowing Penningroth to broaden the scope of his ambitions for his next book.

"Some people interpreted my first book as being about the beginnings of a proto-capitalist economy among slaves," Penningroth says. "I don't see it that way, or that this slave economy pointed toward the erosion of slavery. If anything, it strengthened it. Slavery was a running battle between labor and capital, and slave-owned property was a product of the masters' interest in spending as little as possible on their slaves. Property is not an inherently liberating force in the world. I recently read this book about the developing world that said if you'd just give poor people in Haiti and Peru property rights over their slums, that would be transforming and end poverty and hunger overnight. But there's no reason to think that's true. There's no proof of the liberating potential of property."