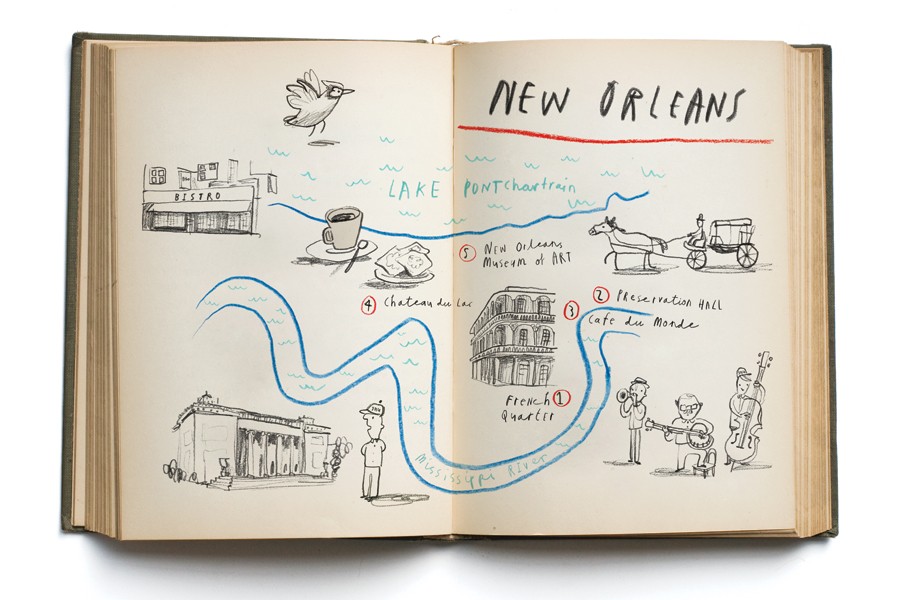 There's no doubt that New Orleans is one of the most vibrant cities in the country. Its charms and attractions are many, from the picturesque French Quarter (1) to downtown's Preservation Hall (2) to Caf&eacute; Du Monde (3), the famous purveyor of beignets and caf&eacute; au lait—not to mention the many off-the-tourist-path spots that the locals know and love.

Frank de Caro, A&S '64 (MA), and his wife, Rosan Jordan, felt the pull of New Orleans. They moved there in 2004 from Baton Rouge, where de Caro was a longtime professor of English at Louisiana State University. "Baton Rouge has always been too suburban," he says. "We liked the urban feel of New Orleans." De Caro has since become involved in the fledgling Johns Hopkins alumni chapter in New Orleans, which aims to foster a sense of community among the hundred or so Hopkins alumni in the area and raise the university's profile among prospective students.

Last June, the chapter held a kickoff event at Ch&acirc;teau du Lac (4), a traditional French bistro in Metairie, to drum up enthusiasm and membership. Since then, they've hosted gatherings at de Caro's home during Mardi Gras (which, in addition to networking opportunities, afforded attendees the rare clean bathroom near the parade route) and at such area museums as the New Orleans Museum of Art (5), the oldest fine arts museum in the city, and the Ogden Museum of Southern Art, which focuses on the cultural and visual heritage of the American South. In November, organizing committee member Lauren Richey, SPH '06, put together a panel discussion at Tulane University School of Medicine that was centered on the Affordable Care Act and its impact on New Orleans. And this fall, chapter members are planning to start a program that will partner alumni with promising high school juniors from a variety of socioeconomic backgrounds; the alums would serve as mentors and get Johns Hopkins on the students' radar.

Richey, who has lived in New Orleans since 2007, says the time feels right for an alumni chapter in the Big Easy. "The first couple of years I was here, [New Orleans] didn't have the energy that it currently has," Richey says. "Hopkins alumni want to plug into the dynamism of the city."