The United States sent 12 men to the moon from 1969 to 1972 during NASA's Apollo program. To do so, it cost $3 billion—in 1972 dollars—per round-trip ticket. That's the dizzying conundrum of space exploration: The sums of money and the physical scale are so outsized that it can be difficult to qualify the science bang for the buck. Mars, where the Curiosity rover landed last year, is, at its closest, some 34 million miles from Earth. Curiosity's journey there took eight months and cost about $2.5 billion. What we learn from it is yet to be determined. 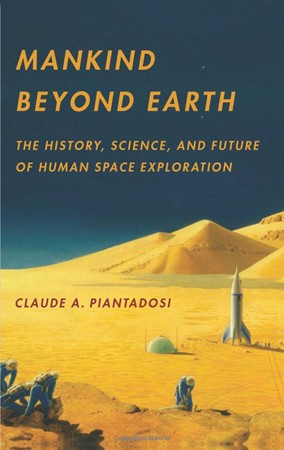 Claude A. Piantadosi's Mankind Beyond Earth: The History, Science, and Future of Human Space Exploration (Columbia University Press, 2013) is a critical but engaging defense of that process. Piantadosi, Med '75, is the director of Duke University's F.G. Hall Environmental Laboratory, and in his introduction he admits that he has worked on NASA contracts over the past 20 years but that he's not a NASA man. That makes him an expert insider, and his brisk and thorough examination of the U.S. space program so rich and detailed.

The structure of Mankind is as much an economics-of-science study as it is a cultural history-of-science narrative. Piantadosi brings those two together to frame space exploration as both good economic and scientific sense. He writes with a casual confidence, covering the necessary requirements and improvements in biomedical sciences needed to support human life during space travel as succinctly as he discusses the energy physics that makes space travel possible.

This broad approach dotted with detailed examples allows Piantadosi, come the book's end, to discuss hypotheticals involving spacecraft velocities at 10 percent the speed of light to travel to Alpha Centauri nearly 25 trillion miles away, and he's provided the lay reader with enough background to make the scenario seem nearly plausible. It's the sneaky way he lets space exploration speak for itself: The book's cover features an image from space art pioneer Chesley Bonestell that recalls those midcentury magazines that posited space exploration in the realm of science fiction. But where reading science fiction often makes the impossible seem possible, reading Mankind Beyond Earth makes the hard to comprehend become able to be considered, a subtle illustration that knowledge in and of itself often offers its own rewards.