The Smart Set was The New Yorker of the early 1920s, featuring fiction by F. Scott Fitzgerald, O. Henry, Willa Cather, Dorothy Parker, James Joyce, and many more. As a student in the Writing Seminars, I imagined that these young unknowns had emerged as literary giants from the pages of The Smart Set the same way that brilliant writers—myself included—would spring up from our Introduction to Fiction and Poetry 1 course. 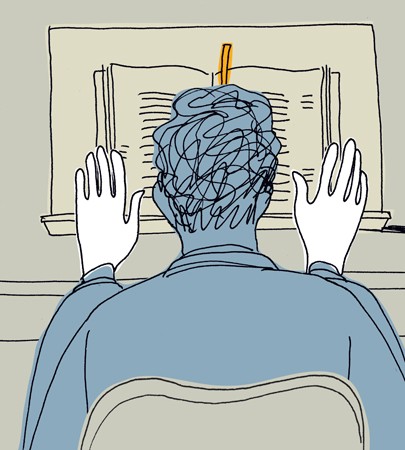 Until, as a sophomore in one of Professor John Irwin's classes, I learned that despite The Smart Set's star power, editor H.L. Mencken had to siphon profits from mass-market monthlies like Black Mask and Saucy Stories to keep his sophisticated magazine afloat. I'd not realized that, even decades before television, good fiction had been a hard sell—and suddenly, to try and write it seemed an increasingly lonely prospect.

The Sheridan Libraries keep original issues of The Smart Set in Special Collections. They weren't there when I was a student, but if they had been, I'd never have known. At the time I believed writers ought to avoid libraries like tired clich&eacute;s. How could you write about people if all you read were books? I rarely kept up with assigned readings and I wrote my stories the night before they were due, often while my friends watched television in the same room.

By my senior year, I'd begun writing in the quiet hours before everyone else woke up, or after they'd all gone to sleep. I struggled for months to finish one story, but the ending kept eluding me. Finally I went to see my professor, Jean McGarry, and she recommended I read Conrad Aiken's "Silent Snow, Secret Snow." Planning to check the book out of the library and flee, I ventured down to M-Level for the first time and asked for help.

The only copy they had was in Special Collections, a library within the library, full of rare books that could never be checked out. The librarian led me into a windowless room and placed the fragile Aiken book on a lectern. I was to turn the pages by slipping a piece of string between them. Scared to even breathe, I read that story more slowly than I'd ever read anything in my life. I don't even know how long I was down there. I'm not sure I ever left.

These days, I teach classes and hold office hours in a college library. I wrote most of my first novel at the tutoring desk there. On weekends I go to the special collections of museums and libraries to write about rarities like The Smart Set for another innovative literary magazine that is always trying to make ends meet. Thankfully, I still see many of my old college friends, my smart set. But now, when I spend time with them, there is a part of me that's always elsewhere—in a library within a library, quietly moving pages with lengths of string.

Kristopher Jansma is the author of the novel The Unchangeable Spots of Leopards (Viking/Penguin, 2013). He teaches creative writing and writes a monthly column for Electric Literature. He and his wife live in New York City.