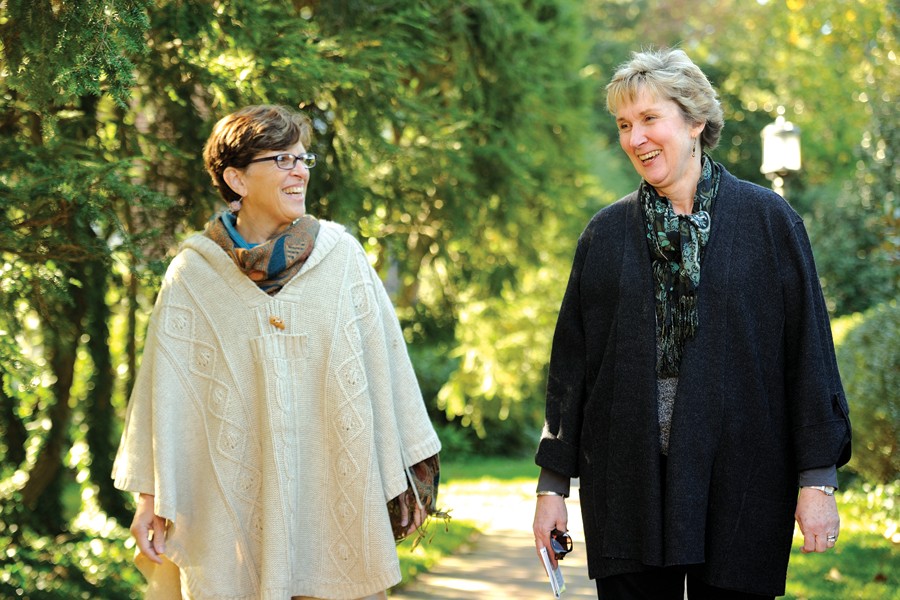 In their friendship of more than 40 years, Jean Hochheimer Hochron, A&S '74, and Coleen Erdman Friedman, A&S '74, have helped each other through life's milestones—getting married, navigating the workplace as working mothers, sending kids off to college, losing parents. Their first shared milestone occurred in September 1972, when they met at Johns Hopkins as undergraduate transfer students, joining the historic Class of 1974. Just two years earlier, Hopkins had broken a 94-year tradition and admitted the first female undergraduate students, marking the beginning of coeducation at Homewood—a move that many faculty, administrators, and students supported, while others vehemently did not.

On the surface, Hochron and Friedman were different: "She was tall and fair, and very poised," says Hochron. "I envied that—I've got more of an edge to me. I'm from outside New York City, I'm short, I move at a totally different pace." But despite their differences, they were both women, and at Johns Hopkins in 1972, that was as meaningful a connection as any. "We were allowed into this rarified world of very demanding academics," says Friedman. "And not only did we have to do well for ourselves, we had to prove that women could do well at Hopkins. So we set the bar very high for ourselves, and I think that was a common feeling."

Looking back, Hochron says she and her fellow female classmates put up with prejudices that now seem unfathomable; after a disagreement with one professor, for instance, Hochron recalls that he told her, "Don't you understand? We really don't want you here."

The focus, then, was on succeeding. "Each of us women who were there had those kinds of challenges," Hochron says. "But we didn't know until recently when we got together [last October, at the First Women of Johns Hopkins reunion] that we were all doing this, and we were all doing this on our own. Everyone just put one foot in front of the other."

Years after graduation, Friedman recalls how she and Hochron had felt as working mothers. "It was very difficult to be a professional woman, have children, and still maintain a career," she says. "When Jean had her first child [in 1980], she negotiated with her employer to convert to part time, working three days a week—and that was a brand new concept. And so I copied her."

"We commiserated a lot," says Hochron, who would call Friedman every Friday morning when she was putting away the groceries.

"Being at Hopkins at that time and in that era made us feel empowered," says Friedman. "And I think we feel like we still have something we have to prove. That never goes away."