A quest for the perfect piece of toast

Since last August, a man-made robotic rover the size of a small SUV and outfitted with more gadgets than a Food Network test kitchen has been traversing Mars to assess the planet's climate and geology, and ascertain whether the place ever offered favorable environmental conditions for life. It has sent back streams of data and one stunning photo image after another. Pretty nifty. 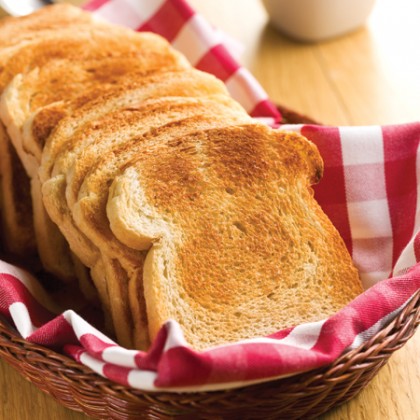 Now, if only humans could make a perfect piece of toast.

Louis Minsky, a senior computer science major in the Whiting School of Engineering, and classmates Patrick Luckett and Noah Greenbaum recently set out to solve this gastronomic problem. They were students in Noah Cowan's Robot Sensors and Actuators class this past fall. Cowan, an associate professor of mechanical engineering, had challenged his class to design, build, and test cooking-related devices. They had to use sensors, actuators, a quantitative display, and fundamentals learned in the classroom to create capstone projects. Minsky, like the rest of us, has been on the wrong side of some black, bound-for-the-wastebin slices, so a better toaster became his capstone.

Before they got into the lab, Cowan's class visited Waterfront Kitchen in Fells Point and met with the restaurant's consulting chef, Jerry Pellegrino, a onetime biophysics doctoral candidate at Johns Hopkins. (He was only a dissertation away from earning his PhD when a culinary career beckoned.) Pellegrino focused his talk on molecular gastronomy, the study of the physical and chemical processes that occur while cooking. "Cooking is all science," he says. "It's reactions, controlling temperatures, and precise measurements."

For their capstone, several students opted for technology used for slow cooking vacuum-sealed food in a water bath, a method called sous vide (French for "under vacuum"). In a sous vide device, a heating element and circulator pump evenly heat the water, and sensors measure the cooking process so that a tiny built-in computer system can maintain the desired temperature for hours. Some students focused on making sous vide burgers. Others bagged and cooked sweet potato fries, apples, and chocolate and marshmallows for s'mores.

Minsky concentrated on toast, which turns out to be tricky. Blame it on browning. "Browning is a positive feedback process that is actually exquisitely sensitive," he says. "As the toast becomes brown, or darker, it starts to absorb much more infrared radiation from the heating elements, thereby quickening the heating process, causing it to brown faster and faster." A few extra seconds or degrees of heat, he says, can make or break a piece of toast. The perfect amount of browning is essential, Cowan says, to achieve the Maillard reaction—the chemical reaction between an amino acid and a reducing sugar that in bread's case leaves a brown color.

Some researchers in the United Kingdom already had uncovered, or so they claimed, the recipe for perfect toast: heat at 154 degrees for 216 seconds. Using this as a base, Minsky and his team went to work tricking out an off-the-shelf toaster oven. They inserted a precision thermometer and connected it via relay to a controller that managed the heating process. The students then programmed the controller to maintain a constant temperature for the precise desired amount of time. The controller turned the heating element on and off if the interior conditions went above or below the specified temperature.

The results, Minsky says, were delicious. "It was shockingly good. We thought the first slice might have been a fluke, but we used two whole loaves of bread and every piece we made was light and golden brown, just the perfect amount of crispiness."

One small step for mankind.