Finance, have you met economics? 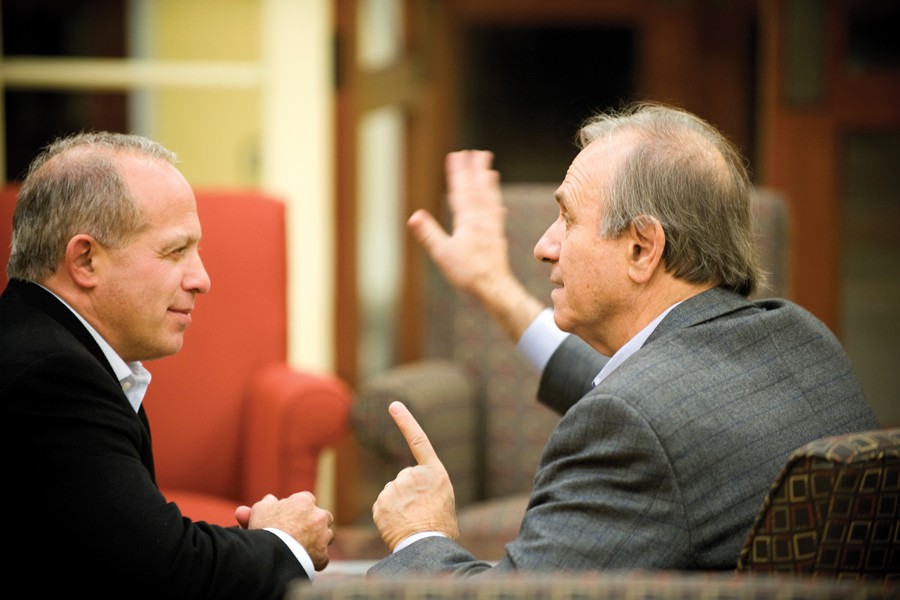 Image caption: Lou Maccini (above, right) professor of economics, has taught at the Krieger School for 44 years and previously served as chair of the Department of Economics. He was also instrumental in founding the Center for Financial Economics, where he currently serves on the faculty as senior adviser. Chuck Clarvit (above, left) is CEO of Vinci Partners-US, an asset and wealth management firm headquartered in Brazil. He has served on advisory boards for the Center for Financial Economics and the Krieger School, and is currently a member of the Johns Hopkins Board of Trustees and chair of the Student Life Committee.

In 2008, the world watched helplessly as stock markets took a nose dive and financial institutions collapsed left and right. Jobs evaporated, foreclosures skyrocketed, and the value of real estate and retirement funds plummeted. Economists, financial wizards, elected officials, monarchs, dictators, and central bank presidents all struggled with the same problem: How to respond to the worst financial crisis since the Great Depression? Bail out the banks or allow them to collapse? Embrace big-spending fiscal stimuli or employ tight-fisted austerity measures? Wasn't somebody supposed to have an answer for all this?

Nearly 10 years earlier, Lou Maccini, professor of economics at the Krieger School of Arts and Sciences, and Chuck Clarvit, A&S '78, now CEO of the Brazilian asset and wealth management firm Vinci Partners International, had been asking the same question. They knew that finance—the science of saving and lending money—had strayed too far from its foundation in economics, a discipline that seeks to explain prices, income, production, consumption, the distribution of goods and services, and the use of money. Conversely, otherwise brilliant economists didn't have training in the language of finance and Wall Street. Their solution? Establishing the Center for Financial Economics at Johns Hopkins, which opened in 2007. We spoke with Maccini and Clarvit to discover how the center bridges the gaps between economics and finance and what it could mean for the future of our global economy.

Chuck People spend money, time, and attention as they get up to speed to vote for a president. That leader has certain tools to help steer the economy, and there are many, many tools available to central banks like the Federal Reserve. But there is next to no financial understanding about this among a tremendous number of individuals. That makes for a very strained political situation when financial crises take hold, and that is where the world almost came unglued just recently.

Lou We started conceptualizing the center 10 years before the financial crisis. We were concerned that basic ideas in economics and finance were not effectively integrated. An example is the idea that a large and well-connected financial institution in trouble could cause problems for financial markets as a whole and the entire economy—something now known as systemic risk. This idea became a reality when the 2008 collapse of Lehman Brothers triggered a stock market plummet and destabilized other financial giants. It's the reason the Treasury and Federal Reserve intervened. Now what economics and finance are crying out for is integration of ideas and training so that students have the capability of thinking about how to prevent these disasters.

C When I worked at [New York investment bank] Oppenheimer, I had finance and economics students from lots of colleges and universities come to us looking for jobs. I could discern the brilliance of Hopkins economics students who were schooled and capable, and certainly qualified, but they didn't know the language of Wall Street.

L There were research activities going on in economics departments, which study what determines the economic variables that we see every day: prices and income and wages and profits and international trade. And then there were research activities going on in finance departments, which study financial variables like interest rates on bonds and the stock market and borrowing activity. And there wasn't a great deal of communication and interaction in trying to see the interplay between the two. For example, macroeconomists hadn't paid much attention to how the relative risks associated with different financial assets could affect the economy as a whole—a lesson that turned out to be important years later during the financial crisis. So we came up with the idea to establish the Center for Financial Economics.

C I think what a lot of other schools produce are individuals who believe they need to be as competitive as possible to derive profit maximization. What the Center for Financial Economics is all about is the macro element of that. You have to understand all the elements, how they mix, how you can still derive profit, but make sure what you're mixing together doesn't blow up the world.

L Over the last 50 years we've seen financial firms become much more interconnected. If one of these firms collapses like Lehman Brothers, it has ramifications both nationally and internationally. We need to have a better understanding of this interconnectedness. If a problem such as plummeting stock values hits economies throughout the world, what's going to happen? And for policymakers, what can be done to minimize these problems or deal with them when they occur?

L That's where we see ourselves going: having an impact on research, thinking about how finance and economics interact in the world, and training students who have an understanding about making decisions in that environment and advising policymakers.

C If we can influence policy, if we can get the world to recognize that Hopkins is really setting a framework for how economics and finance should come together, we hope to influence governmental departments, the foundations that fund things like this, academic visionaries who contemplate this kind of stuff. We have a chance to have an enormous impact in the not-too-distant future.