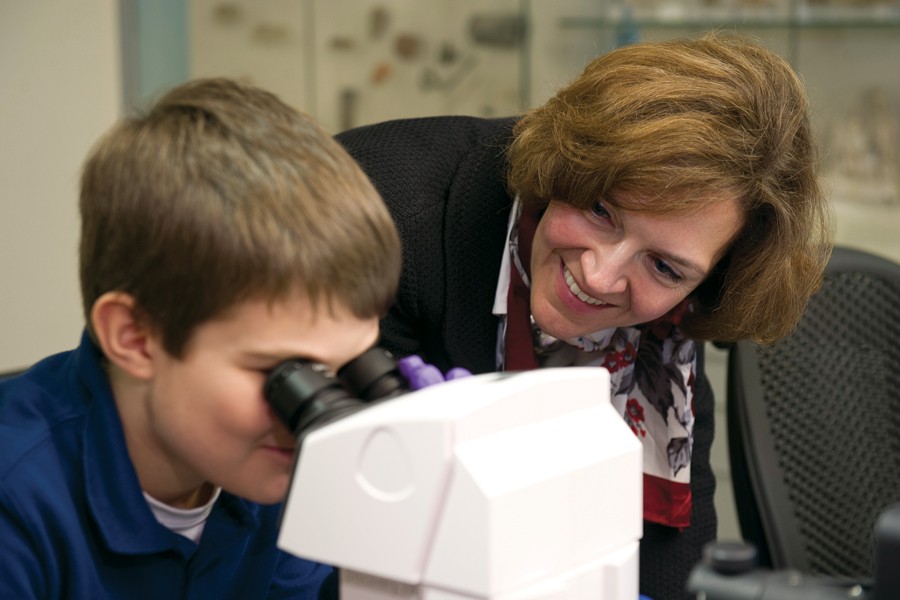 Image caption: While Terri McBride was in Baltimore for a board of trustees meeting last December, she and her son Jackson examined several ancient artifacts from the collections at the Johns Hopkins Archaeological Museum.

While many families with young children spend spring break relaxing at the beach or visiting Disney World, Terri McBride, SAIS '99, and her family spent their break last year at the ancient port of Butrint in southwest Albania. "We thought nothing of getting up at five in the morning to take the ferry—retrofitted with airplane seats—from Corfu to Butrint," McBride says with a laugh. Exploring this ancient archaeological site, situated on the Straits of Corfu, was pretty standard fare for McBride, her husband, Kevin O'Neill, and their three sons, Jackson, 9, Whitman, 7, and Quinlan, 5. "We love history, archaeology, being outdoors, and exploring places that we have never seen before," McBride says. "This is so completely normal for us."

McBride, who lives in London, brings this sense of adventure to her new position as president of the Johns Hopkins Alumni Council, the governing body of the Alumni Association. "It's Terri's international perspective—we have chapters everywhere from Baltimore to New Delhi—that makes her such an extraordinary representative for today's Alumni Association," says Susan deMuth, executive director of Alumni Relations.

When asked why she travels from her home in London several times a year to stay involved with the university and the Alumni Association, McBride says, "Whether it's looking at Woodrow Wilson's application to Johns Hopkins at the Brody Learning Commons' grand opening [last] October, or sitting on the board of trustees, I come away more enriched. And I get to meet exceptional people from all across the nine divisions of Johns Hopkins."

It's the personal relationships and finding the commonality among diverse groups of people that have bonded McBride to Johns Hopkins, beginning with her student days at the Paul H. Nitze School of Advanced International Studies, where she earned a dual MA/MBA degree in international economics and finance from SAIS and the Wharton School of the University of Pennsylvania. Today, McBride works for the international consulting firm McKinsey & Company in a chief operating officer/chief of staff role for the Europe, Middle East, and Africa Organization practice, helping people and organizations with complex strategic and operational problems that require making and implementing decisions in highly collaborative environments.

Her collaborative skills and ability to appreciate different perspectives were on full display, while, in her previous role as first vice president of the Alumni Council, McBride led the council through the creation of a new long-range strategic plan. As president, she is now guiding the implementation of that plan, which includes creating a more active and engaged association.She also hopes to increase the level of interaction between alumni wherever they may be.

"While we are one university, there is no singular experience, and I believe recognizing our commonality and celebrating our differences makes us a stronger alumni association," she says.