Welcome to the crib

In the fall of 1986, when most U.S. college students were "Living in America," John Redpath, SAIS Bol '87 (Dipl), was living his own version of Three Amigos at the Paul H. Nitze School of Advanced International Studies' Bologna Center. He'd come by way of frosty Minnesota to earn a diploma in international studies, crammed himself into a small student apartment, and begun to enjoy his stay: Oktoberfest in Munich, festivals in Verona, and regular dart games at the nearby pub La Frasca. 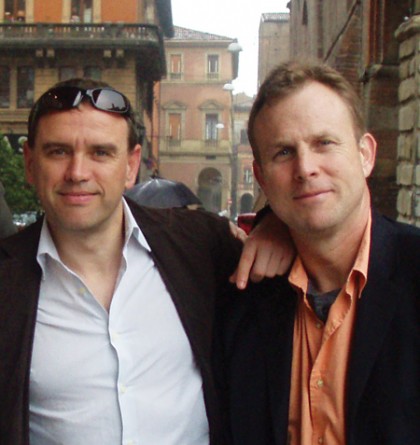 "One day I came home, and there was crap all over the apartment. This euro-paraphernalia was strewn about, tennis rackets, bags everywhere. I was sure a middle-aged Spanish woman had moved in," he says. "It turned out to be Juan."

"I just want to set the record straight," cuts in Juan Blazquez, SAIS Bol '87 (Dipl), SAIS '88, a Basque Country native who had arrived in Bologna a couple of weeks late so he could wrap up his summer job translating at an international film festival. "First of all, I only brought one racket and one bag—"

"It was your mom's bag, though," says Redpath.

When Blazquez moved in, he entered "a land of friendliness based on alcohol and card games," he says. "But it wasn't until Christmas break that we brought out the cribbage board." The rest of the school year, the students played cribbage games in doubles, triples, or in fours, and the roommates and friends who dropped by diligently recorded the stats on a public board for all to see. Only cribbage losers ever ran errands or washed the dishes.

Though the year may have felt like one long cribbage match, "we did actually turn up for classes, and we took our finals," says Redpath.

Blazquez did well enough to earn an extended scholarship; by the next fall, the two were in Washington, D.C., attending classes at SAIS and living with a group of eight guys they knew from Bologna.

Redpath met his future wife, Katya, while at SAIS, and they married as he began a career in the commodities market. After 25 years on Wall Street, he and three former colleagues launched a commodity trading company, Trail Stone LPE, this year.

Blazquez started his career as a marketing manager for an artificial intelligence startup company, and today he and his wife, Chirine, and their children are still settled in D.C., where he works in the South Asia region at the World Bank.

"We talk about all the fun stuff, but over the years, we both had some pretty big personal tragedies and challenges. Those were the times where, I mean, honestly . . ." Redpath trails off. "Juan is one of the closest friends I never see."

"John has always been there when things weren't so easy. If I'm having a hard time, I often think to myself, 'What would John do?'" says Blazquez. "After all, he's a pretty well-balanced guy ... who can't play cribbage."