A new approach to personal training

Obesity trends in the United States make personal trainer Deborah Weathersby, A&S '94, shake her head. According to the Centers for Disease Control and Prevention, as of 2010, more than one-third of adults and nearly 17 percent of youth are obese. The CDC also reports more than three-quarters of the country's health care costs are due to chronic diseases such as heart disease, diabetes, cancer, or arthritis, all of which can be prevented or minimized by eating right and exercising regularly. But while the U.S. fitness industry generated more than $21 billion in revenue in 2012, it's an industry supported by only about 16 percent of the population. Surely there's a way to provide the health and quality-of-life benefits of exercise to a larger portion of the population. 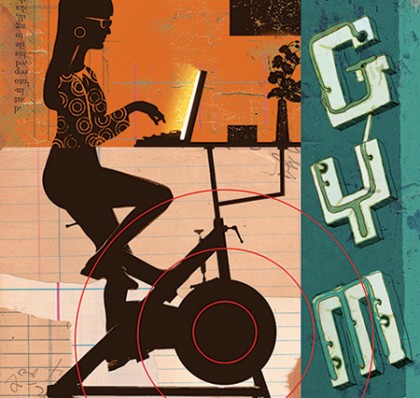 "I was getting really frustrated with every corporate gym that I've worked at where it's like Glengarry Glen Ross selling techniques," says Weathersby, who has been in the fitness business for 20 years. Being pushed to your physical limits by an overenthusiastically motivated trainer might work for committed gym rats, but it's less successful for people who aren't already in shape. According to fitness consultant Thomas Kulp, the industry neglects to create an environment that reaches people who are overweight or out of shape. "Instead, we decided that fitness was something to offer only the fit," he wrote in the June 2011 issue of Club Industry, an online magazine for fitness professionals.

The International Health, Racquet and Sportsclub Association reports a steady annual increase in fitness club and gym memberships, from 24.1 million in 1995 to 50.2 million in 2012. Less clear is the number of those people who joined a gym and stayed. In the association's "2007 Guide to Membership Retention," a former IHRSA executive director wrote that "membership retention for commercial fitness facilities had always been a subordinate objective" to profitability.

"In any other business," Weathersby says, "if you're only selling to the people who are already buying your product, something's wrong. Gyms are not picking up that there's a giant market out there, but it means that you have to change how you approach it in order to attract those people."

Having worked with sponsored endurance athletes before, Weathersby has seen successful distance-training programs that enabled, say, a triathlete in San Diego to train with a coach in Vermont. But those programs used expensive, proprietary software. Could the same approach work to offer regular people directed, individualized, and less-expensive distance training— using video chat programs such as Skype or FaceTime and a project manager like Basecamp?

One of Weathersby's first clients for her new model was a woman who wanted to lose weight for her wedding but couldn't stick to an exercise program. During her initial consult, the client explained that she hated feeling so sore that she couldn't move for days afterward—a fact that Weathersby incorporated into her individualized workout plan: The client needed to be pushed just enough to feel something but not to the point of exhaustion. "She just loved it," Weathersby says, adding that the woman started losing a pound a week with the plan. "She says, 'This is the best thing that's ever happened to me. I can do it in my house, it's not intimidating, nobody has to see me, and I don't have to add another errand to my day.'"

Weathersby's online personal training business, Victory Fitness, has been up and running since May and has 12 clients. And Weathersby would like to see this model take off. "Of course I want my company to succeed, but what I really want is for the fitness industry to change," she says. "I go to these conventions and they're teaching the same [ideas about how to recruit new members] that they've done for years. They're talking to people who already love fitness and want to feel amped up and pushed to their limits. And I think the goal needs to change. The goal needs to be to reach out to people, find out what their goals are, and help them reach them."