Hi-res imaging and the future of health care

Advances in imaging over the last five years have revolutionized almost every aspect of medicine. 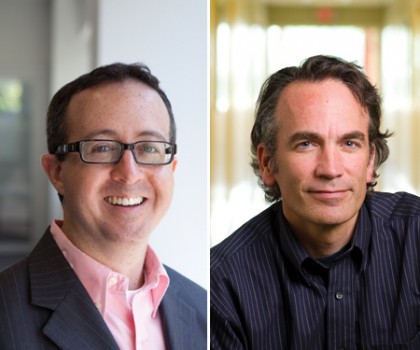 Image caption: Guy Shechter (left) is senior director of medical affairs at Philips Healthcare, in the suburbs of Boston. After completing degrees in biomedical engineering at Johns Hopkins, he joined the research arm of Philips and was responsible for defining the clinical and technology strategy in medical navigation before taking on a leadership role to help institutionalize the company’s chief medical office. Elliot McVeigh (right) is the Massey Professor and director of the Department of Biomedical Engineering at the School of Medicine. He worked with Elias Zerhouni to develop a research program in cardiac MRI at the university and in 1991 founded the Medical Imaging Laboratory in the Department of Biomedical Engineering. Techniques developed out of his MRI research group form the foundation of the modern cardiac MRI. His lab demonstrated numerous novel applications, including the first MRI-guided injections of therapeutic agents directly into the myocardium.

Exploratory surgery has largely been mothballed now that physicians can use various imaging modalities to noninvasively detect a tumor, artery blockage, or organ malfunction. Digital 3-D mammography can detect tumors previously obscured, and now there's talk of physicians carrying around scanners in a briefcase and even their pockets.

Guy Shechter, Engr '96, Med '04 (PhD), says his interest in medical imaging started when he was an undergraduate at Johns Hopkins, where he majored in biomedical engineering and computer science. Shechter first crossed paths with Elliot McVeigh in his junior year, when he took McVeigh's Topics in Medical Imaging and Magnetic Resonance in Medicine courses. McVeigh later recruited Shechter to his lab, where Shechter conducted studies on segmentation (the identification of individual structures in digital images) and motion tracking. His oft-cited papers on the motion of the heart and its coronary vessels are now considered classics. Recently, Shechter and McVeigh got together to share thoughts on the medical imaging profession.

Guy When I think about the applications of medical imaging, I bucket them into three areas: screening, diagnosis, and therapy. In terms of therapy advances, there have been interesting applications, like how we can use ultrasound, which historically you think of as a screening modality. Through the years, people have started to ask the question: "What if I tweak the ultrasound system a bit and instead of just making images, I use it to actually heat tissue?" If I focus these ultrasound waves, I can actually raise the temperature inside the body very precisely. If you take something like that and combine it with magnetic resonance (MR), you can have high-resolution images as well as make measurements of these temperature changes in real time. You can treat noninvasively using the ultrasound, while at the same time monitoring and adapting that treatment with the MR.

Elliot There is virtually no exploratory surgery done anymore. Not only that, but there are precise surgical pretreatment plans based on images for all sorts of procedures, like removing tumors. One other advance is in staging. Because of the metabolic rate in tumors, you can see if and where a tumor has metastasized in a PET scan. You know precisely the stage of that person's cancer. You know how to treat them instead of just making a guess and slamming them with chemotherapy. You ask any clinician, [and] the first thing they do is knock on the door at radiology and say, "OK, tell me what's going on here." And if you hang around with radiologists in their office—the really good ones—there is someone knocking on their door like every 20 minutes.

G The other thing I'm seeing is the rise of ultrasound. I remember as I was finishing up my PhD, during one of our encounters, you said to me: "Have you seen these ultrasound images that they get nowadays? It's phenomenal. 3-D ultrasound. 4-D ultrasound. Where did that come from?" Now what you see is miniaturization. You read the literature and they say that the ultrasound scanner will be the stethoscope of the future, where every physician has one in their pocket and they pull it out.

On one hand, that's great; the technology is there to support that and it will be very valuable to patients. The other side is the concern that if we put this technology in the hands of people who are not yet skilled enough in reading ultrasound images, there is the potential they will see things that are not really there out of an abundance of caution.

E One problem with imaging is that it uncovers things that, before you saw them, you wouldn't treat. And maybe the best thing was to leave it alone. But now that you see it, you are compelled to treat it. Early on, when MR first produced these gorgeous images of the spine, we discovered that 35 percent of people over 40 have a bulge in one of their disks. Do you do surgery on all those people? For a while, they did. But you really don't have to. The same thing happened for X-ray coronary angiography for the heart.

Imaging devices are also infiltrating the clinic on the specialty level. So an orthopedic surgery clinic will have imaging devices to guide their surgery. Neurosurgery isn't just an operating room anymore, it's an OR with all the imaging there. If you look at radiation oncology, it's traditionally where you beam radiation at tumors based on images of tumors taken off-site. But now all the imaging is integrated into that process.

G I think one thing that is interesting is this concept of personalized medicine. There are recommendations for a given diagnosis and staging of cancer, as to how that patient should be treated. That can be combinations of drugs. Could be radiation. Could be invasive procedures. Ultimately, the patient and the physician will make a decision. The question is, at what point can you monitor and verify that the decision is working so that you can make a rationalized decision on how to adapt your therapy? I think imaging-specific responses to therapy are going to be an important piece of the puzzle.

E I will go a little bit further and say that imaging technology will be complemented by big data analysis techniques. Companies like Kaiser Permanente will be able to go into their history of 10 million patients that they have treated and ask the question: Who is this person in front of me most like? What 20 or 50 or 100 patients out there were just like this, and what did we do with them, and how did it go?

G I think the key is this "information convergence." One of the transformations that is starting to happen is to be able to intelligently combine all this data—the information on the person's genetic profile together with a blood test and other pieces of information. Data points that on their own may not be remarkable, but when you have this convergence of information, answers come into view.