Behind the numbers: How guns kill cops

In 2010, David Swedler set out to better understand police officer homicides. How and why were cops dying on the job? A doctoral candidate in the Bloomberg School of Public Health, Swedler wanted to go beyond the figures recorded in the U.S. Bureau of Labor Statistics' Census of Fatal Occupational Injuries. He wanted the stories behind the numbers. In pursuit of those stories, Swedler and his research team discovered a valuable and previously untapped resource: a U.S. Department of Justice database called Law Enforcement Officers Killed and Assaulted. The database includes not only basic statistics about police homicides but narrative descriptions of each violent encounter. The researchers had their stories. 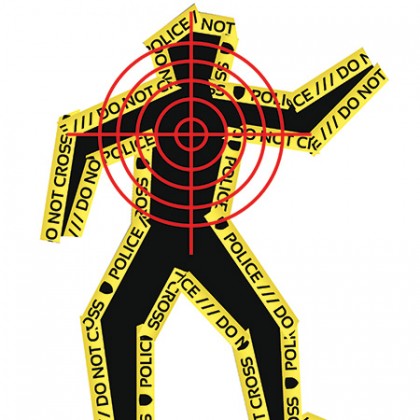 Swedler began by reading every narrative covering a two-year span and identifying all the details that directly or indirectly contributed to each homicide. The team then applied a data collection method known as narrative text analysis. "We went methodically through every single case and captured the same data, and from that we were able to see the themes and make a consistent numerical database," says Swedler. "Using this method is a good way for researchers to get raw epidemiological data from a population. No one to my knowledge has ever used this database in this way before."

The results were published this spring in the journal Injury Prevention. The study revealed information that surprised Swedler. First, an overwhelming number of the officers—93 percent—died from gunshots. "We expected guns to be commonly used," Swedler says, "but we thought that homicides would be perpetrated by other means as well. We were really surprised by that 93 percent." In 10 percent of cases, officers were shot with their own guns. In 43 percent of the homicides, the victims were working alone, often responding to domestic disturbance calls. "They would arrive on the scene and they would be ambushed and they weren't prepared," Swedler says.

Reading all the accounts of officers walking into their deaths was "incredibly depressing," Swedler says. One narrative began, "On April 15 at approximately 17:15, a 29-year-old patrol officer was fatally wounded when he responded to a domestic disturbance call. The officer . . . was the first officer on the scene. Exiting his vehicle, the officer walked to a small one-story house, approached the porch, and was immediately hit by a single round to the chest."

Swedler says, "We came to this as a pure occupational health and safety issue. By better understanding what scenarios these officers are dying in, we could help in the discussion about future injury prevention." For example, the incidence of police shot with their own firearms suggests adoption of "personalized" firearms that can be fired only by an officer or his or her partner. Many of the fatal wounds were to the head and the neck, where police lack body armor. "Should officers wear Kevlar helmets?" Swedler asks. The number of police killed when they responded alone to domestic disturbance calls indicates a need for backup in those situations. "More research like this could contribute to better training," Swedler says. "These officers are put into very difficult situations, and we want to prepare them as best we can."