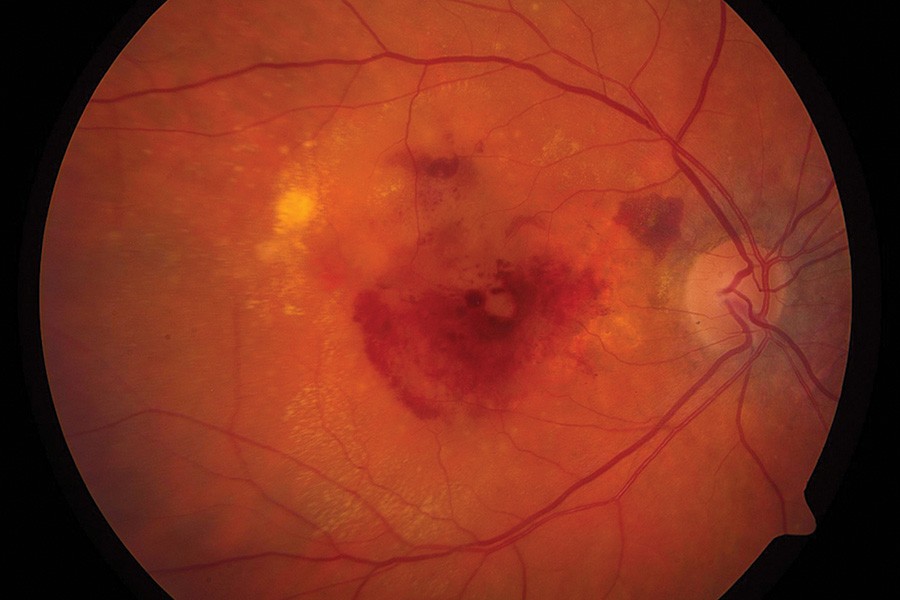 Image caption: Damage to a retina from “wet” macular degeneration.

Patients under treatment for "wet" age-related macular degeneration now must receive injections in the eye as often as once per month. A new drug with a time-release coating, which proved effective in laboratory mice, could reduce the need for injections to only two or three times per year. Learn more

Bad news for grumps: Men and women with cheerful temperaments are less likely to have heart attacks or suffer sudden cardiac death. Researchers found that positive outlooks were associated with a one-third reduction in coronary events. They noted that the mechanism behind the positive effects of cheerfulness is not clear, which is perhaps something to be grumpy about. Learn more

Nursing research determined that a home-based program called "Beat the Blues" helped more than two-thirds of financially strained older African-Americans reduce symptoms of depression. When members of the control group were added to participants after four months, they too benefited. Learn more

In May 2012, after Facebook facilitated users sharing their organ donor status online and registering as donors with state departments of motor vehicles, new donor registrations increased more than 20-fold in the first day, according to a new study. Twelve days later, registrations were still running at twice the normal rate. Learn more

Astrophysicists have demonstrated that not only can black holes produce the high-energy X-rays previously noted in observations, it is inevitable that they will do so. The scientists used supercomputer-generated simulations and calculations done by hand on notepads—yes, you read that correctly—to create a model of how a super-heated corona of gas spiraling around a black hole produces the X-rays. Learn more

The Spitzer Space Telescope observed Comet ISON emitting 120 million pounds of dust and 2.2 million pounds of what is probably carbon dioxide every day. Space scientists are studying the comet as it hurtles through the solar system. Later this year, it may become so bright as to be visible from Earth in daylight. Learn more

Holding liquor retailers liable for harm caused by patrons who were drunk or underage when served has been found to reduce that harm in states that have "commercial host liability" laws. Nevertheless, a new study found that several states have enacted laws to protect retailers from such liability. Learn more

When pediatricians use trained medical interpreters in dealing with families that speak limited English, medical outcomes improve and there are fewer errors. But two national studies found that 57 percent of surveyed pediatricians rely not on interpreters but on family members, despite the greater likelihood of miscommunication or mistakes. Learn more

African-American men diagnosed with very low–risk prostate cancer are much more likely than white men to actually have an unrecognized aggressive form of the cancer. A study of 1,800 men ages 52 to 62 found that delaying treatment in favor of monitoring the cancer through an "active surveillance" plan may be the wrong course of action for black men. Learn more