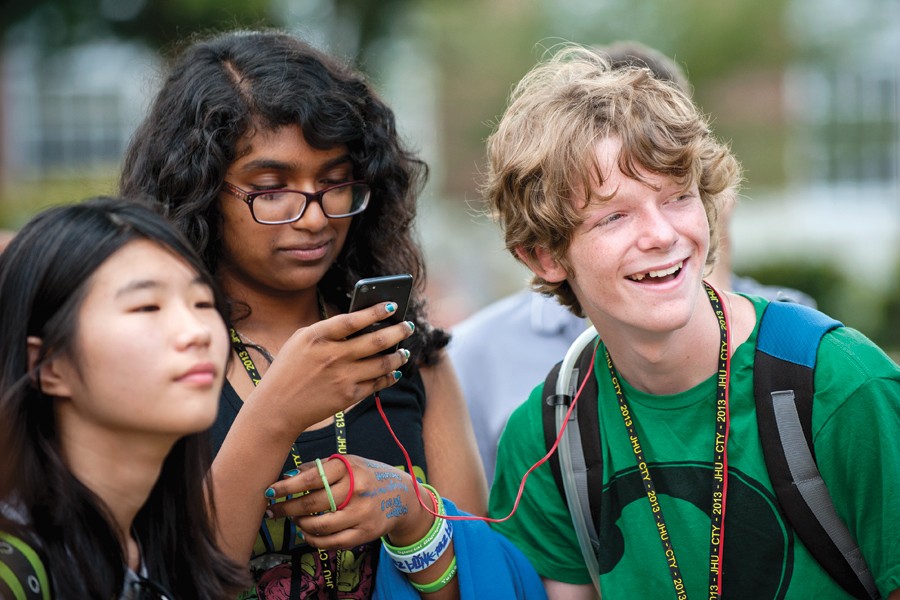 Image caption: Wyatt Bair, right, takes a break with some friends after a Center for Talented Youth class.

Earlier this year, ninth-grader Wyatt Bair was reading a "really fun and neat" book about multiple dimensions and time travel: The Universe in a Nutshell, by theoretical physicist Stephen Hawking. Bair often borrows science and math books from the local community college library to study his favorite subjects: astrophysics, biology, and "awesome math" like pi and the Heisenberg uncertainty principle. Bair was advanced from an early age; at just 4 years old, he told his mom that the Earth's magnetic poles are squashed because of gravitation. But in the past, his intelligence interfered with both school, which was often too easy, and his relationships with peers, who didn't always understand him. By fifth grade, "my vocabulary had extended to the point where if I went any further, people had no idea what I was talking about," he says. "And I was surrounded by kids who didn't care about anything I was interested in."

But Bair—who lives in Ronceverte, West Virginia, where there are 1,765 residents, 118 of whom are in his age group—knew this summer would be different. He is one of 40 seventh-, eighth-, and ninth-graders who participated in the Johns Hopkins Center for Talented Youth through the Rural Connections scholarship program. CTY offers an intensive three-week academic program at 24 sites across the United States and Hong Kong. Started last year and funded by the Jack Kent Cooke Foundation through 2014, the Rural Connections program provides a full $4,000 scholarship for tuition, room and board, and application fees—plus additional funding for travel, lab fees, and materials— to talented but underserved students from rural communities. Most Rural Connections scholars say that the program is the first time they've met friends who are on the same intellectual level. "Three weeks of overnight camp with my peers, people who I'll become friends with, and teachers who are going to be teaching really awesome stuff is really pleasing to me," Bair says.

This year, nearly half of last year's Rural Connections students received other scholarships from CTY and private donors to attend the program a second time. Tenth-grader Matthew Ellison, who lives in Jericho, Vermont (where, he jokes, there is a "chicken on every corner"), returned this year to "branch out" and take paleobiology at the Franklin & Marshall College CTY site in Lancaster, Pennsylvania. But Ellison is a math guy first—in June, he competed in the annual American Regions Mathematics League competition, and his team placed 17th out of 55 Division B teams—so last year he took a rigorous Number Theory course, where he learned about Fermat's last theorem and unique factorizations. The course had an unexpected effect: When he came home, Ellison could better communicate with his grandfather, a mathematician. At CTY, he also met like-minded friends. "The kind of person who would go to CTY is someone who is interested in academics and pretty bright," says Ellison, who also plays tennis and runs cross country. "It's pretty easy to relate to people who you have that much in common with."

Former Rural Connections student Natasha Rubright, a 10th-grader who lives near the Pinelands National Reserve in Medford, New Jersey, has already had two reunions with the friends she met at Franklin & Marshall last summer. She built these friendships, in part, through CTY's "super weird but awesome weird" nightly activities like Pudding Cosby Fun Hour. "We all thought we'd be going to watch Bill Cosby in nice air conditioning and eat pudding," she says. "But when we got there, we made paper sweaters." She also enjoyed the nightly "Glums and Glows" hall meeting, where students talked about the best and worst parts of their days. About the low points Rubright says, "I never had one."

The course Logic: Principles of Reasoning had a life-changing impact on Rubright. She remembers one discussion about why the philosopher Socrates, thrown in jail in Athens and facing execution for questioning the gods and teaching youth to do the same, chose not to escape when he had a chance. Rubright and her classmates were fully engaged in the discussion—a welcome departure from her regular school, where everyone agrees with each other. "A lot of kids at my school don't want to be judged, and they don't care about the topic as much to really dive into it," she says. Inspired by CTY, Rubright, who was initially nervous about starting high school, joined the freshman soccer team and added honors Latin to a schedule that already included honors classes in geometry, algebra, and Spanish. "I realized there was so much more that I could be doing to help myself grow intellectually and socially," she says. "So I kind of came back and was like, 'Sure, I'll dive into two math classes and two language classes and just own it.'"