Political theorist Samuel Chambers was finishing up his book about contemporary French philosopher Jacques Rancière when the fourth season of Breaking Bad began airing in the fall of 2011. The associate professor in the Krieger School's Department of Political Science is no stranger to watching popular culture through a political prism. His 2009 book The Queer Politics of Television treats television shows such as The L Word, Buffy the Vampire Slayer, and Six Feet Under as political texts, discussing how they articulate political meanings and ideas. But in Breaking Bad, he encountered a storyline that dramatized some of the ideas he wrestled with in his academic work. 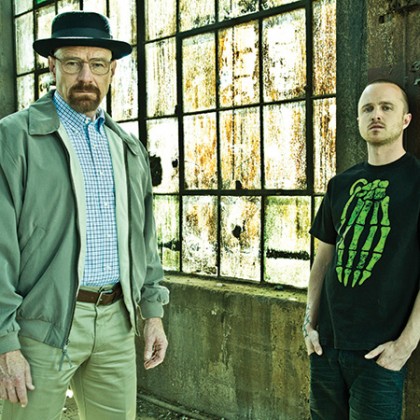 Chambers opens "Bad Teacher" with a compact introduction to his reading of Rancière's thoughts on pedagogy. To Rancière, teaching traditionally relies exclusively on explanation: An instructor assigns a text to students, who read it and return to class, where the instructor lectures from the position of being the expert on the subject. To explain a text to someone who has read it is "to treat that person like a brute who is incapable of understanding," Chambers writes in the paper, and this relationship not only assumes students lack the ability to understand what they read without the teacher's explanation, it makes sure they won't learn. Chambers calls this sort of teacher the stultifier, since explanation, for Rancière, leads to stultification in the student. The goal of education should not be to stultify students but to emancipate them— or as Chambers quotes Rancière, "to oblige . . . the student to use his own intelligence." Chambers teases this idea out further, arguing that an emancipatory teacher ideally provides the experience for the student to realize the "equality of intelligence" between student and teacher.

Chambers' critical reading of Breaking Bad understands White as the stultifier and Fring as the emancipator in their relationships with Jesse. It's a refreshingly novel way to think about the show. Walter White is normally treated as just another of television's morally flawed male anti-heroes. Chambers' reading places White and Breaking Bad in an American context where the story has more going on than the cat-and-mouse game between White and his brother-in-law (and DEA agent) Hank. "There's more at stake in the cultural politics of TV than drawing the viewer to flawed men," Chambers writes. "I'm interested in the relation between the world constructed by a TV series and the world that we live in. This is one of the many reasons why I think the pedagogical relationships in Breaking Bad are potentially important, because pedagogical relations are ubiquitous, and in Rancière's argument, we see that the question of emancipation (of human freedom) is bound up with the question of students and teachers, of learning and teaching."

Chambers adds, "The main claim in my article can in some ways be boiled down to this: We see the stakes of the cultural politics of Breaking Bad much more starkly when we interpret Season 4 as a contest between Walt and Gus waged not just in terms of power and force, but in terms of a competition over Jesse as student. I think that most traditional pedagogies would be unable to see Gus as a teacher, since he doesn't really do any traditional teaching. But Rancière's pedagogy, in which the teacher can 'teach what he does not know,' makes possible an entirely different way of viewing Gus. And more to the point, reading Season 4 as a pair of competing pedagogical relationships (Gus/Jesse vs. Walt/Jesse) gives us a whole new view of Walt."