On a Saturday night in April 2004, I stood taking notes in the Johns Hopkins lacrosse locker room. The Blue Jays had just defeated the University of Maryland in the 100th renewal of the biggest rivalry in men's intercollegiate lacrosse. Addressing his happy team, head coach Dave Pietramala said, "This game wasn't won tonight. This game was won last Tuesday in that first ground-ball drill."

That is, the game was won in practice. We routinely speak of athletes playing a game. He plays football. She plays field hockey. But a varsity runner or point guard or swimmer or shortstop does not play anywhere near as much as he or she practices. A starter on the Johns Hopkins football team plays one game per week during the regular season. He might be on the field for 25 to 30 minutes of actual game time between kickoff and the final whistle. But in the week leading up to that game, he may have spent 10 to 15 hours on the practice field and in the weight room. Swimmers often train twice a day, around two hours per session; if you're a sprinter, your event in a swim meet may last less than two minutes— less than 30 seconds if you are a 50-yard freestyler. Athletes spend 20, 40, 60 minutes preparing for every minute of competition, and that's if they get to play. Every team sport has reserves who are rarely called off the bench to enter the game. But they practice as much as the starters. Practice is what athletes do.

I spent nine months documenting the practice of every Johns Hopkins varsity sport, 22 teams and 14 sports in all. A Hopkins athlete has virtually no chance of a pro contract or lucrative endorsement deal or spot on the Olympic team after graduation. Outside of lacrosse, no Hopkins athlete plays a sport in exchange for a scholarship. They play because they love the game and love being part of a team, and because of a vital quirk in human nature: Once we realize we can do something really well, we want to do it again and again, and we want to see just how good we can get. Even if it requires exhausting work, a high tolerance for monotony and frustration and a hollering coach, and endless drilling to master a thousand details that spectators rarely appreciate.

What lingers in my mind as I review these pictures are things like the routine endurance of runners. The ferocity of football players in the weight room, or of women lacrosse players running drills against each other. The sheer capacity for work of swimmers. The pound-for-pound power of wrestlers. The hardness of the field hockey ball that skipped off wet turf and smacked into my shin one night. The ever-present sweat and pain. After only a few weeks of each sport's season, players began showing up for workouts with bandages and braces and ice packs, sometimes with slings and crutches. They often looked dazed with fatigue at the end of practice. The next day, they did it all again. Tennis champion Serena Williams recently told a writer from Rolling Stone, "When I stop playing, it's not going to be because I'm sick of it. It's going to be because I'm sick of practicing."

That sound you hear is a couple hundred Johns Hopkins athletes nodding their heads. 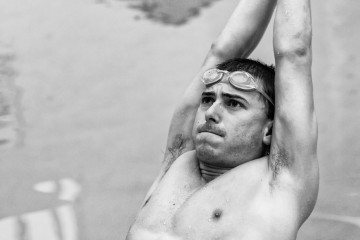