Art of the everyday

"I'm the poet of circuses/ but also art galleries and snacks," claims David Kirby in his new collection, The Biscuit Joint (Louisiana University Press, 2013) and, really now, why be the poet of anything else? Florida State University English Professor Kirby, A&S '69 (PhD), has spent four decades peeling the banana of everyday life to bite into its flesh in language that once might've been called the vernacular. In Kirby's fine-honed lines, though, the colloquial becomes expressive, pliable, and potent. Kirby's ear appreciates the casual elegance in the abbreviated, impromptu way we talk, and he polishes the seemingly mundane until his lines land with equal parts barroom brio and libretto majesty. 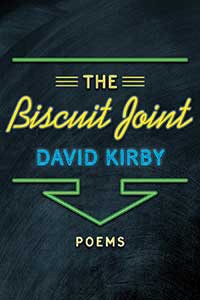 The carpenter's skill invoked by the book's title uses a wafer of wood to create a tight fit between two boards.

Done successfully, it creates a seamless fit, and the idea informs Kirby's verbal moves inside the 19 poems here. He skips from Karl Marx to Paradise Lost to tuna melts without derailing a discussion of the aesthetic experience ("What's the Plan, Artists?") and swings from tacky T-shirts to Thomas Hardy while mapping the creative imagination ("I ❤ Hot Moms).

Kirby has long threaded brows high and low into the same sentence, recognizing that it's pointless to sustain the artificial gulf between them. Besides, hot moms go to the symphony, too. For Kirby, what separates the banal from the beatific is the language we use to describe them. And with The Biscuit Joint, he pens a persuasive argument that life is essentially trivial and monumentally important simultaneously: Major events and prosaic routines run together like unpunctuated sentences; they're turned into our experiences in memory's editing room. In "Breathless," Kirby uses an ode to Jean-Paul Belmondo, that icon of French New Wave cool, to kneecap the self-deprecation that young men use as macho armor, spotlighting the narcissism required to take pride in claiming "to be the biggest jackass in your town." By the poem's end, though, this witty homage to a man who was "awesome" before "that word was used mainly/ to describe pizza" becomes a lament of time's passing—the recognition that our own creative prime passes too quickly and it's always too soon to ask: How do you know when to stop? Hopefully, Kirby won't anytime soon.