Trivia: Gaston-Johansson is the first African-American woman to be a tenured full professor at Johns Hopkins and the first nurse to be elected to the Royal Swedish Academy of Letters, History and Antiquities, a scholarly organization established in 1753.

Favorite place to travel: The west coast of Sweden

Favorite musicals: The Sound of Music, Dreamgirls, and Mamma Mia!

First, tell me about the Painometer! 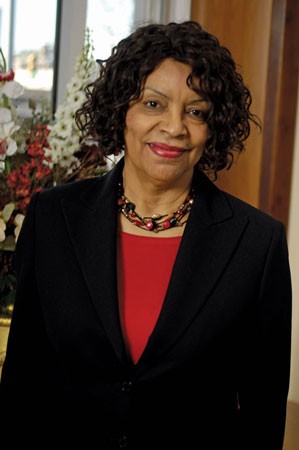 Image caption:Fannie J. Gaston-Johansson is a University Distinguished Professor and former chair of the Department of Acute and Chronic Care in the School of Nursing, and director of the Center on Health Disparities Research.

The Painometer is an easy pain assessment tool that enables patients to identify the location of their pain, the kind of pain, and how much they are bothered by the pain. The Painometer distinguishes between the emotional and sensory components of pain. The sensory component differentiates cramping, burning, stabbing, and pressing pain, for example. There are 14 different terms. Then patients indicate how much they are affected by the pain, whether it is nagging, agonizing, troubling, tiring, or sickening. There are 11 different terms.

When did you first begin to think about issues of language and pain?

Back in the 1980s, when I was working on my dissertation, at the University of Gothenburg, on pain assessment and psychological distress. I would be working with patients and asking about pain symptoms, and they would say things like, "Oh, I don't feel pain, I feel ache." I was learning Swedish at the time and, as in all languages, the different words for pain, such as ache and hurt, meant different things.

Do you think you would have come up with this tool if you weren't trying to learn a new language?

I don't think so. I was using the wrong terminology, and yet in the course of being told the right word, I would learn something more about the patient's pain. A child might say, "I don't have ache, my grandmother has ache. I have hurt." Every term carries different meanings that can make a difference in diagnosing a symptom. Specific language is crucial, whatever language you are speaking.

Is the Painometer in wide use?

Not yet in the United States. We're using the tool in research studies, primarily in research into chronic pain syndrome and postoperative pain. Eventually it might be standard in medicine cabinets at home. The pain location diagram, with numbered regions, would allow a patient to describe over the phone the specific location of his or her pain, which would help in diagnosis. The Painometer is used pretty widely in Norway and Sweden and has been cited in studies there.

Your recent work is in health disparities and breast cancer?

Yes, I've been researching disparities in treatment for African-American women with breast cancer. I've been involved in studies of symptom management, chemotherapy, and pain management. We've been looking at the coping strategies of African-American women after cancer treatment, including studies that involve their significant others—husbands, brothers, partners, parents. It's very satisfying work. After his mother died of breast cancer, President Bill Clinton put a substantial sum of money into the Department of Defense to study breast cancer. This was outside the National Institutes of Health; he was looking for new approaches to research.

You've divided your time between Baltimore and Gothenburg, Sweden, for decades. How did you manage this?

I have four children. They were getting older and I wanted them to learn more about American culture and my heritage, so we moved to the States after I had lived 16 years in Sweden. I was happy to be home again and the kids loved the USA, so we stayed. I have, however, traveled back to Sweden many times during my tenure at Johns Hopkins University, and I served as dean of nursing at the University of Gothenburg.

When you aren't working, what do you like to do?

I like musicals! I like the one with the songs by Abba—Mamma Mia!—I've seen it on stage and also the movie version, with Meryl Streep and Pierce Brosnan.

Do you think the Painometer would be helpful in describing relationship heartache?