At the end of every summer, climate scientists monitor a key indicator called the Arctic sea ice extent. As the name suggests, this is the measure of how much of the Arctic Ocean remains frozen at the end of the warmest months. This year, the end- of-summer Arctic ice cap was the smallest on record—in the far north, there was less floating sea ice and more open seawater than ever observed. Thomas Haine, an oceanographer and professor of Earth and planetary sciences in the Krieger School of Arts and Sciences, has been working to monitor and understand how water flows out of the Arctic, especially freshwater. He warns that major changes in the Arctic ice cap could be part of a chain of effects that could alter ocean composition, Atlantic currents, and the rate of global climate change. 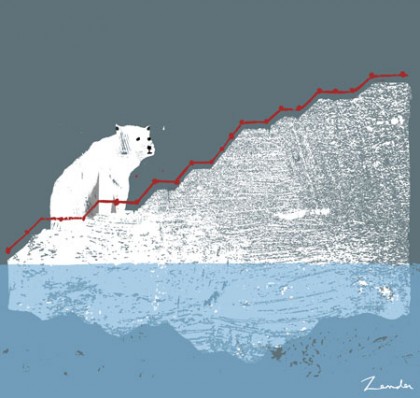 Some of the substantial changes in the Arctic are apparent and well publicized. "The minimum sea ice extent is now at about half what it was, say, in the 1980s and 1990s. That can be measured from satellite quite well," says Haine. "But you need to worry about not only extent but thickness. It's much harder to measure, but the measure we have shows that the ice is, roughly speaking, about half as thick as it was. So it's half the extent, half the thickness. By the end of summer this year, it was three-quarters gone." Also apparent have been rising temperatures—Arctic temperatures have increased at almost twice the global average rate in the last 100 years. But oceanographers like Haine have a list of less apparent changes that may be part of an ominous overall picture.

In the Atlantic Ocean, warmer, saltier water moves in a northeasterly upper ocean current from subtropical waters toward Europe, helping to moderate the climate in places like Great Britain. This surface flow is counterbalanced by a southerly flow of colder, deeper water out of the Arctic, forming an ocean conveyor system known as the meridional overturning circulation, or MOC. Scientists project the MOC will slow down in the 21st century. Haine participates in Arctic/Subarctic Ocean Fluxes, known as ASOF, an international oceanographic research program established in 2000 to study fluctuations in the mass, heat, ice, and composition of the Arctic and northern Atlantic oceans. ASOF is keeping its collective eye on several changes in the Arctic that might relate to changes in the MOC, including a striking accumulation of freshwater.

Haine ponders the interconnections that are part of a complex system that scientists by no means fully understand. He points out that when Arctic ice melts, this lowers the albedo, or the reflection of solar radiation by white ice. Lower albedo means more heat from the sun is absorbed rather than reflected, which raises temperatures, increases the pace of global warming, and speeds the ice melt—which further increases warming. Higher temperatures mean the air holds more water vapor, and that means more precipitation. More precipitation means more freshwater entering the northern ocean. Freshwater is lighter than salty water, so researchers anticipate a lesser volume of salty, denser water sinking to form that deepwater flow essential to the MOC. Now add all the freshwater flowing from the melting Greenland ice cap. Says Haine, "We anticipate there will be changes in this deep-ocean circulation. These things are all connected and coupled in ways which are not entirely clear."

Changes in ocean circulation are bound to cause further changes in global climate. Scientists are certain that Arctic water is becoming fresher. This can only mean that freshwater is building up in the Arctic Ocean, and indeed this has been measured in a portion of the ocean called the Beaufort Sea. One day, perhaps from something as simple as a change in wind direction, that accumulated freshwater will likely flow into the northern North Atlantic. No one knows what that might do to the ocean conveyor system. Says Haine, "It's a fascinating time to study the changing Arctic Ocean. We have ideas about what may happen and we must ensure that the right observations are made to see the changes unfold."