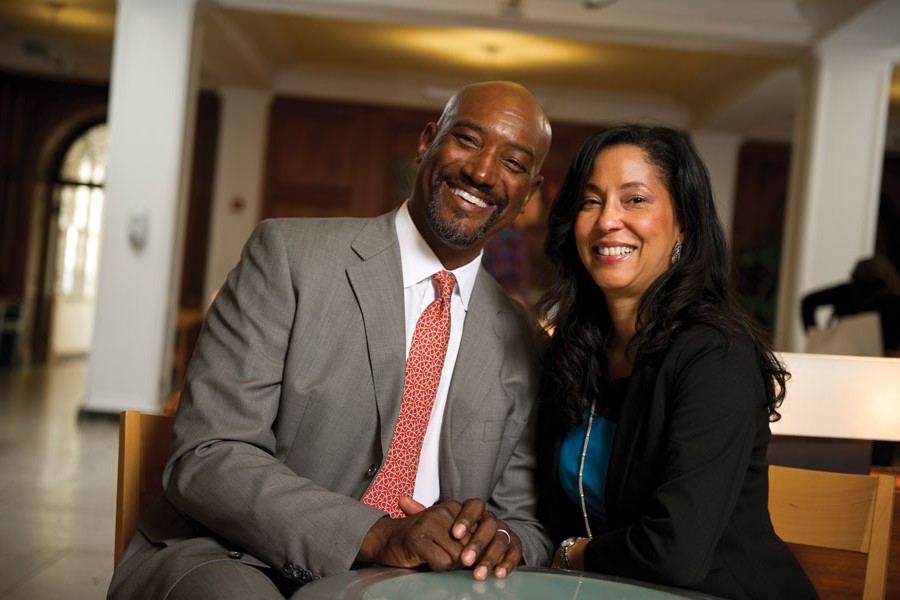 "We didn't really get along when we first met," admits Janine, who was introduced to Robert at a Black Student Union meeting. Her quiet nature and previously "cloistered" life attending Catholic schools couldn't have prepared her for Robert, a "big-man-on-campus kind of guy" who was a leader in the BSU, captain of the basketball team, and DJ for campus events. Robert's initial impression wasn't much better: "I thought she was very stuck-up," he says. "I did think she was attractive—that's a given!"

What finally brought them together? It was a Thursday night at the Rathskeller—a bar and dance floor in Levering Hall—and Robert was the DJ. "Out of the blue, she approached me," says Robert. "That was definitely out of character for her, and I wasn't going to waste the opportunity, so I asked her to dance."

The romance lasted for most of their time at Johns Hopkins. Although they parted ways at the end of their junior year, the spark was rekindled—this time long distance—during the first year at their respective professional schools. Janine went to Howard University College of Medicine and ended up in Washington, D.C., conducting clinical research at the National Institutes of Health. Robert traveled west, first graduating from law school at the University of Michigan and then moving to Los Angeles where he eventually worked his way into the city's largest family law firm.

It was around that time, in 1995, when the Society of Black Alumni formed, that they began to see each other more often. Robert, who was on the executive committee, would fly to Baltimore for the meetings "and we'd start dating for a while, but distance would get the better of us, and we'd break it off—until we got together again," he says. Eventually, says Janine, "we realized we could either keep doing this for another 27 years, or we could choose to get really serious about our relationship and our lives."

The couple chose to get serious and finally married on April 11, 2008. Today, they live in North Potomac, Maryland, close to Janine's work as director of the Office of Research on Women's Health, which coordinates all women's health research at NIH. Robert's home base is in Maryland, but he still commutes to his thriving law firm in Los Angeles, which he started in 2000 to represent celebrities, athletes, and other high-net-worth individuals in family law cases.

"Hopkins alumni events gave us a reason to keep coming back to one another," says Janine. "Without Hopkins being at the center, I don't think we'd be together."