Riot girls and the Russian state 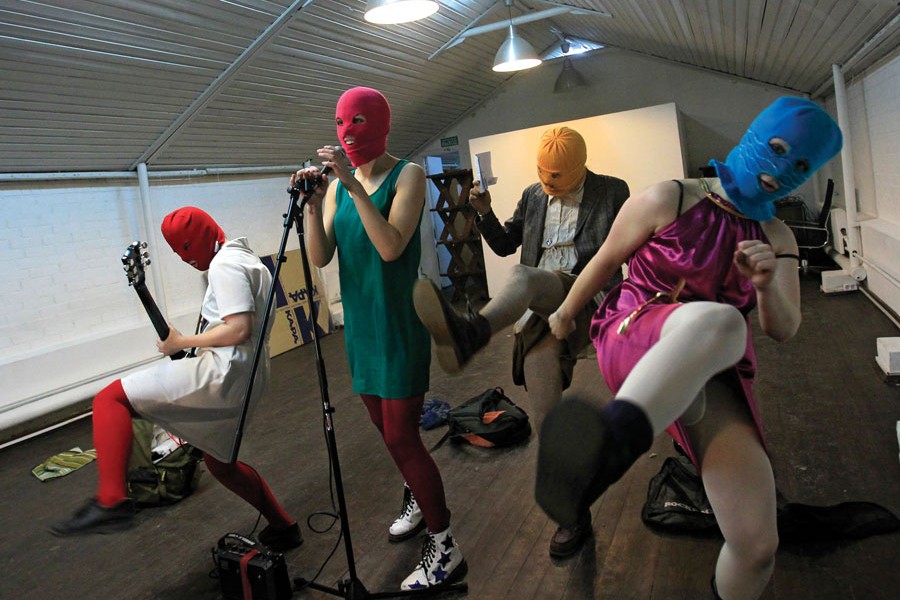 Nikolay Koposov doesn't much care for Pussy Riot's music. A visiting professor in the Krieger School of Arts and Sciences' Department of History, Koposov is a historian, author, and St. Petersburg native who appreciates the artistic freedom of the all-female Russian punk rock band that found itself in the international spotlight after a February performance in a Moscow church landed some of its members in jail. But the music itself? Not so much. "It's maybe that I'm a little bit [of an] old-fashioned professor, but for me it's a little bit artistically wild style," he says.

In understanding contemporary Russian politics, however, Koposov sees the Pussy Riot case as another example of how the Russian state polices its history. "Pussy Riot was the first really serious manifestation of the change of the political line, the turning point in the different phases of [Russian President Vladimir] Putin's politics of institutional memory and internal politics," says Koposov, who says the Russian state is moving from more subtle ways of control to active censure.

He has personal experience with this change. In 1999, he became the founding dean of Smolny College of Liberal Arts and Sciences, Russia's first liberal arts college, a partnership between Bard College in New York and Saint Petersburg State University. He occupied that post until 2009, when he and his wife, Dina Khapaeva, Smolny's first director for international relations and research, were invited to be guest scholars at the Helsinki Collegium for Advanced Studies in Finland.

In May 2009, before they took their research leave, then Russian President Dmitry Medvedev formed a commission of legislators and intelligence officers to identify efforts to falsify "history to the detriment of Russia's interests." The resultant "memory laws"—initially drafted to contest foreign governments' "revisionist" versions of World War II that diminish the Soviet Union's role in liberating Nazi-occupied territories in Eastern Europe—also curtailed historians' scholarly work. After Koposov, his wife, and their colleagues organized a petition against the laws, the government said their academic writings were a danger to Russian national security, and they lost their Smolny positions.

Today Khapaeva is the chair of modern languages at Georgia Institute of Technology, and Koposov is at Johns Hopkins. His fall 2012 course, titled Why Putin? The Rise and Fall of Democracy in Russia, 1985-2012, in part explores the idea that history can be considered a memory shared and created by governments and their citizenry.

Pussy Riot, says Koposov, stepped right into that process when the group entered Moscow's Cathedral of Christ the Savior and performed "Punk Prayer —Mother of God, Chase Putin Away!" which directly indicts the church and state's collusion of power. Pussy Riot was formed in August 2011 after Putin announced he would seek another presidential term. The Russian Orthodox Church's head cleric, Patriarch Kirill, called for parishioners to vote for Putin, even calling Putin's era a "miracle of God."

The band was prosecuted for hooliganism, defined by Russia's criminal code as a "flagrant violation of public order expressed by a clear disrespect for society." To Koposov, the charge is an example of how Russia's national narrative is now being handled by the state. When Medvedev was president, the deputy head of the presidential administration, Vladislav Surkov, dominated the ideology of the state's memory politics. "His game was always manipulating historical consciousness in indirect ways," Koposov says. The 2009 memory laws, Koposov wrote in a January 2011 essay, established a new mythology of Josef Stalin's World War II-era Soviet Union that "emphasizes the unity of the people and the state, not the state's violence against the people." Now, the state's narrative is being handled differently, Koposov argues. "Now the game is just arresting, organizing falsified trials, putting people in jail, and trying to shut them up. It's much more straightforward."

To the West, the women of Pussy Riot may look like punk feminists in the artist/activist mold of Bikini Kill. To Russians, however, the all-women band speaks directly to notions of national identity, says Anne Eakin Moss, an assistant professor in the Humanities Center who is at work on a book that explores how women have been used in Russian and Soviet film and literature to express ideas of collectivity. "The idea of Russian vitality is linked up with this idea of women in a group together."

It's a reading that gives Pussy Riot a slightly different symbolic power. "I think the Western media assumes that they're a feminist group," Eakin Moss says. "But they're not saying that much about women. They're saying a lot about power relations in Russia today, the verticality of the power structure, and the way in which the state has affiliated itself with the church and used the church to set up its sovereignty in post-Soviet space."

Such actions highlight what those old saws about history—about not knowing it and being destined to repeat it, about how it's written by the victors, etc.—have in common. How we remember how we got here is continually written in the present, subject to the foibles of ordinary people who sometimes wield extraordinary power.

"This I know from my own experience," Koposov says. "When you pronounce yourself publicly about something that relates to the state politics of memory, you risk to get in trouble."