From the outset, the Occupy Wall Street movement was hard to digest. Initially branded an anti-capitalist protest, it soon became more nebulous. Neither side of the American political spectrum could quite define it, nor could the media, but that didn't stop anyone from criticizing it. Occupy lacked leadership. It produced no singularly articulated demands. It had no clear political agenda. What do these people want? 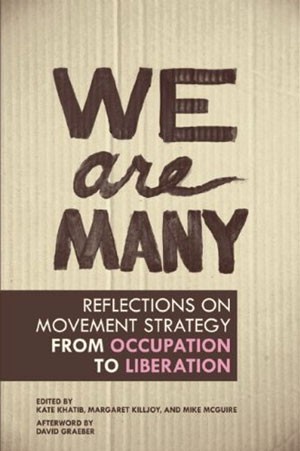 Such frustration is fair enough—it is difficult to have a political discussion with an agitprop Tower of Babel. But ask: Does this noise have some purpose? Occupy recognized that when any movement reduces itself to a sound bite, it has already acquiesced to a status quo in which pre-existing political platforms and news organizations control the narrative. Occupy challenged this norm and short-circuited the switchboard. Noise was the message because the usual buzzwords and search-engine-optimized headlines no longer sufficed.

Such is the passionate argument of We Are Many: Reflections on Movement Strategy from Occupation to Liberation (AK Press, 2012). Co-edited by Kate Khatib, a doctoral candidate in intellectual history at the Johns Hopkins Humanities Center; activist writer/photographer Margaret Killjoy; and organizer Mike McGuire, this 400-plus-page primer brings together roughly 50 writers, artists, and photographers to explore the ideas that shaped the Occupy movement. The book is organized under loose thematic umbrellas, allowing for everything from discussions of class and race in activism (such as "Occupy and the 99%," co-written by editor McGuire and Lester Spence, an associate professor in the Krieger School of Arts and Sciences' Department of Political Science) to overviews of creative labor that came out of Occupy camps.

Interspersed throughout are first-person stories from Occupy experiences—the personal glue that holds the political discussions together. Together, they remind us that although people may not always agree—and to the editors' credit, the book's authors don't all see eye to eye—common ground will never be found via the mutually assured destruction of today's current polarization. That impression makes the book feel like a pragmatic toolkit. It's not trying to convince readers what to think; instead, it advocates that different ways of framing America's problems may be the only way to start solving them.