I had applied to eight colleges. The first seven replies I got were rejections. While we waited for the final blow to arrive in the mail, my family tried to help me envision my college-less future. "You'd have plenty of time for piano lessons," my mom said. "Or you could take up that karate," my dad floated during one especially vivid and depressing kitchen table talk. There was a gathering sense that at 16 years old I had somehow already driven myself into an inescapable dead end. 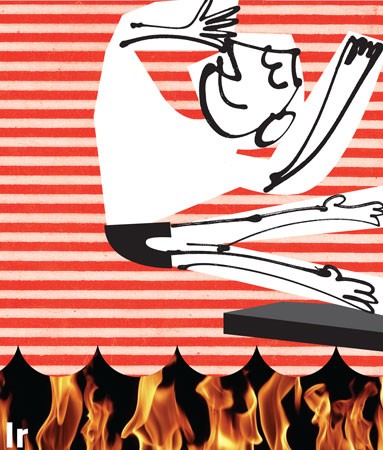 High school had been hard for me, which I guess is simply to say that when I was a teenager, I was a teenager. I was full of anger at who-knows-what, eating mainly cheese ravioli and Blimpie sandwiches, rocketing between poles of secret despair and daydreamy hopefulness. Some of my friends seemed to be acquiring the kind of fortitude to handle the dreary duties of adulthood, but not me. The essay portion of my college applications had been used to try to vaguely explain away the jumble of my GPA—I stuttered! I had scoliosis! Our dog ran away (before coming right back)!—but there was something even then that felt a shade dishonest. My perplexing academic record was less an aberration to be excused and more an inadvertent truth gaining momentum: I wasn't at all good at things that didn't interest me; I was very good at the things that did.

If the algorithms favored by college admissions offices were mainly about evaluating persistence in the face of boredom, if that final pudding of high school was really the creation of young people who could withstand the doldrums to come, then I could not be considered a success story and colleges had reason to turn me away. But I think now what I did have going for me, though harder to quantify, was a growing aptitude for diving into what I loved and disregarding all the rest. This is not the same as saying that I could only handle the fun stuff. That's not what it feels like to engage in something with real conviction.

I don't know how a university is supposed to know whether a kid studying X-Men comic books deep into the night is a sign of expanding imagination or limited intellect, or whether a kid who succeeds wildly at debate but fails massively at math is doomed or full of promise, or if class clowning signals a useful disregard for authority or a nagging lack of seriousness. But the ability to lock onto true interests no matter what anyone else thinks of them, and then go deep, has served me better than a B+ in calculus ever would have.

Seven schools sifted the sum total of my high school achievement and found dust. Only Hopkins would see little flecks of something shiny in the pan.

Jeffrey Blitz was nominated for an Academy Award for his first movie, the documentary Spellbound, and won the directing prize at Sundance for his feature debut, Rocket Science, about a high school debate team in New Jersey. He's also won the Emmy Award for comedy directing on The Office and is currently executive producing a new series for Comedy Central.