The dexterous bassist Michael Formanek appreciates patience in his jazz collaborators. When he composes, he might write an opening section, then designate space for improvised piano but refrain from giving further guidance about how he imagines that improvisation turning out. "My attitude is to say as little as possible to the players, to have the music speak for itself," he says. "It's important to write music that's provocative enough to spur ideas." When he does spur something, he is happy when his bandmates "take small ideas from the music and just work them over time. I love playing in that environment where no one's in a hurry." No one is in a hurry on the new ECM recording Small Places, which Formanek (a Peabody faculty member since 2001) recently released. Pianist Craig Taborn, saxophonist Tim Berne, and drummer Gerald Cleaver respond to his compositional ideas with subtle explorations and elaborations, teasing out musical possibilities and engaging in nuanced conversations that in the studio occasionally struck Formanek as telepathic. 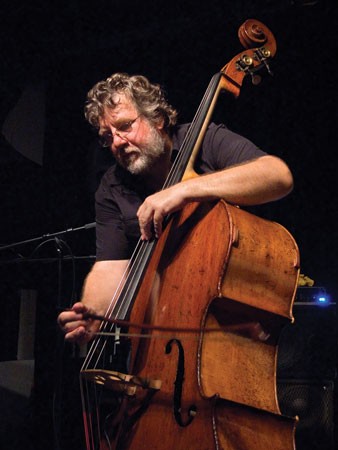 Just back from a tour of Europe, Formanek spends a couple of hours honoring a request to listen to and discuss Small Places, seemingly so relaxed it comes as a shock when he reveals at the end of the afternoon that the airline has lost his custom-made bass and he does not yet know where to find it.

During the first notes of the title cut, he talks a little process. "Sometimes I just start pushing some notes and rhythms around until I find something I like," he says. "Once I get going, I forget about whatever I started with." Taborn improvises and Formanek smiles. "He can sound like three guys when he wants to. It sounds like he can split his brain, it's pretty amazing."

The second piece on the record is called "Pong" because after he'd written it, it reminded him of the progenitor computer game. "It was the slowest video game in the world," he says. "The ball went back and you hit again and you could go to the bathroom and come back, it was that slow. Then it would start to get a little faster, then it would get hyper, and that's how this tune unfolds for me." "Pong" features some of Cleaver's nimble work on the cymbal. "That cymbal's just amazing. All through the record you find these beautiful patterns of his, very melodic."

"Parting Ways," at more than 18 minutes the record's longest cut, began life as a longer piano improv, Formanek's response to sorrow. "Within a couple of years, there had been a lot of people dying and a lot of people leaving. It had been that sort of time and I was thinking a lot about mortality, that was the pervasive feeling." The piece evolves slowly. At one point, Formanek can be heard in the background, behind Taborn's piano, playing some eerie figures that sound electronic. "That's up on the D string, playing harmonics that center around the third, the F-sharp, playing close to the bridge and moving slightly up and down so you get that sound that's almost like feedback, or wind whistling through trees. It's all done with the overtone series on a string." During one bit of "Rising Tensions and Awesome Light," Formanek snaps his fingers as he says, "That becomes a motor for the next section, a slow 5/2 . . . one . . . two . . . three . . . four . . . five . . . but we're playing faster in these rhythmic layers. There's a rhythmic thing I like to do where there's a big slow pulse and faster pulses within that. It's like gear ratios—you have one big gear moving like this"—with his hand he scribes a circle in the air—"and a smaller gear moving faster in sync with it, then there's a third one even faster, and they all exist simultaneously in the piece."

He listens to "Slightly Off Axis" and says of the band, "They'll go as far into outer space as you want to go musically, but they're not afraid to play pretty. I love nothing more than playing beautiful melodies with lush harmonies, but if I had to do that all the time I'd shoot myself." The record's last cut, "Soft Reality," features Cleaver backing the melody with drone notes sounded on a shruti box, an Indian instrument similar to a harmonium. Formanek says, "I don't use drones often, but I had this strong idea. I brought in the shruti box thinking if this was just ridiculous we wouldn't try it, and it just sounded great."

The record ends, and before Formanek goes back to calling the airline in search of his missing bass—it arrived in the middle of the night two days later—he says of Small Places, "It really sounds good. At a certain point I stop thinking about it as mine and more as just music, and that's a good feeling. It sounds beautiful. I'm very happy with it."